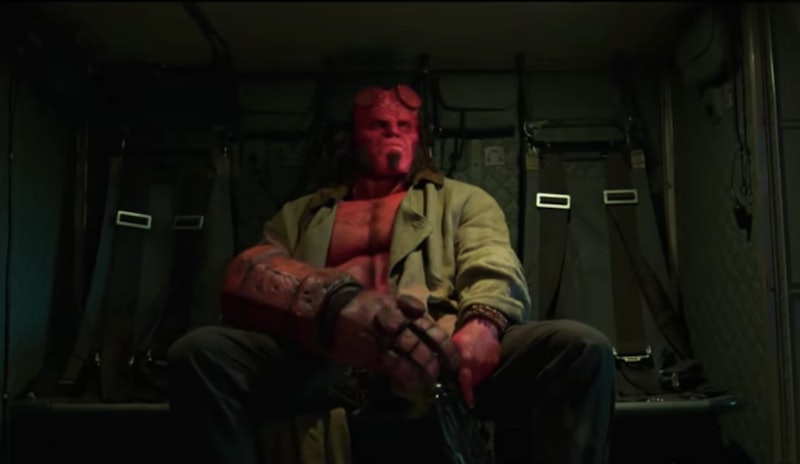 With the glut of anticipated superhero movies coming out this spring, it might be easy to overlook one not tied into a giant expanded universe. Hitting theaters April 12, Hellboy brings back everyone's favorite honorary human for more supernaturally-tinged action. There's a new director, Neil Marshall, and lead actor, David Harbour, taking the helm, and if you're wondering how Hellboy is connected to the other Hellboy movies, it's right there in the title. They share the same source material, but with different approaches and an entirely new cast and focus, they're completely different movies.

At least, that's what Hellboy creator Mike Mignola told Deadline during a talk about the new film based on his comics character. “Honestly, I was a little surprised that they didn’t give it a subtitle," he said of his initial impression of the simplistic choice. Eventually he came around. "They would like this to be the first of many new Hellboy movies and if they had a subtitle it might make it a little confusing," he said. "Is it a sequel like the second del Toro film [Hellboy II: The Golden Army from 2008]? I suspect calling this one just Hellboy sends the message that this is the first one in a new series of movies.”

Originally the film was intended as a third installment in the existing franchise (which also includes 2004's Hellboy), but according to The Hollywood Reporter, Guillermo del Toro wanted a larger budget for the second sequel. The studio balked, and ultimately decided to go with a new director and a full reboot.

Speaking to Nerdist, Mignola said, "About three years ago the producers, the screenwriter Andrew Cosby, and I all started working on this new story. Del Toro didn't want to have anything to do with it, he wasn't going to direct. He was offered to be a producer, and Ron [Perlman, who played Hellboy] wouldn't do it without Guillermo. "Once we had Neil Marshall, we thought, 'Why are we going to try and continue that universe?' Because...you don't want to try and hand a del Toro movie to someone else. Especially someone as great as Neil Marshall. So that's when it went from being this continuation to being a reboot."

Not only is Hellboy a film reboot, Mignola noted this new film more closely captured the flavor of the original comic than the previous two. “I will say, having been on set on the other two [Guillermo del Toro-directed] movies," he told IGN, "[the new movie] was the first time I walked on set and saw something and said, ‘Holy sh*t, that’s right out of the comic!’”

But don't worry, the 2019 version isn't covering already-trod ground. Speaking on the Happy Sad Confused podcast, as reported by Collider, Harbour said, "There is something of [Hellboy's origin], but it’s not really an origin story movie. We kind of pick up the movie like we’re running and gunning. We do have a little bit of stuff where we show stuff, but it really is a story and you just drop in with this guy."

The new film's also got a firm R rating, compared to del Toro's two movies coming in at a PG-13. That frees things up to get a lot gorier, which is appropriate as MovieWeb notes the film's original title was Hellboy: Rise of the Blood Queen, with Milla Jovovich playing the titular villain. The Resident Evil star is still very much in, despite the shortened title.

Fans of the first two films might be disappointed that del Toro didn't get to pull a hat trick with this character. But with a new look and fewer restrictions, this version of Hellboy will likely win them over.