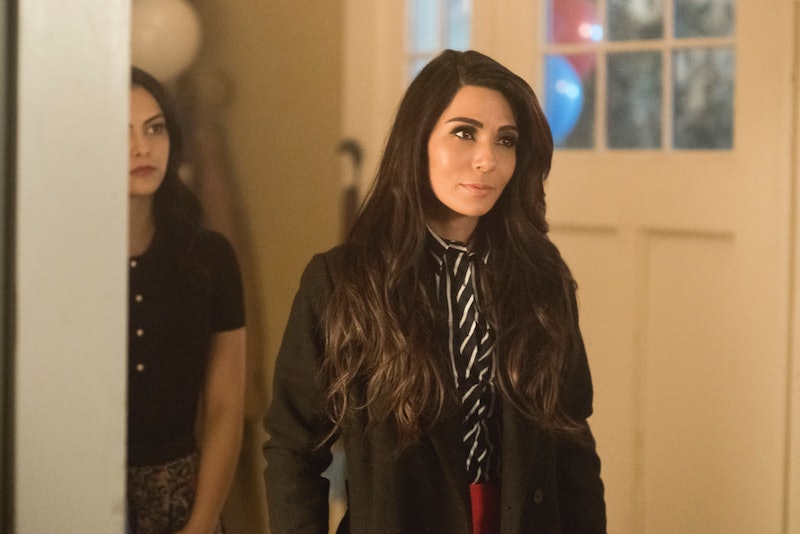 Since Hiram Lodge arrived in Riverdale in Season 2, there doesn't seem to be much going on that he doesn't know about or have a hand in. But is Hiram the real boss of the Lodge enterprise? After all, when Andre picks up Archie and tells him that he's taking him to see "the boss," he doesn't bring him to Hiram. It's Hermione Lodge who meets Archie and tells him that she was the one behind the whole Detective Adams test. Who's to say that Hermione Lodge isn't the real mastermind behind the latest massacres in Riverdale, too? Is Hermione Lodge the Black Hood on Riverdale? Or, at least, the Black Hood's boss.

With his clandestine study and mafioso vibrato, Hiram does seem like the ultimate crime kingpin. However, he and Hermione have almost always been a completely united front. Hermione willingly organized the Serpents sneaking around and devaluing the Drive-In, supposedly for Hiram, but who's to say it wasn't at least partially her idea as well? She obviously endorsed the decision, as she was willing to carry it out while Hiram was behind bars. Hermione might play the part of the devoted mob wife, but in Riverdale, nothing — and no one — is ever as it seems. Here's why.

There Must Be More Than One Black Hood

Initially, like Betty, I was convinced that Hal Cooper had to be the Black Hood. But after Mr. Svendson's death, and after Hal was clearly unmasked during the shootout at the debate, I'm not more convinced than ever that there has to be more than one Black Hood. If this is true, there must be someone organizing all the various Black Hoods to do their bidding. And who does organized crime better than the Lodge family?

Most theories, like this one from Claire Spellberg of Elite Daily, point to Hiram Lodge as the obvious choice for being behind the Black Hood murders. While this does make some sense — he's pretty evil and self-serving, he has plenty of motive to hurt Fred Andrews, and I wouldn't put it past him to heartlessly murder other people — it almost seems too obvious. Given that the show has already given us so many hints that Hermione is the Lodge that is actually pulling the strings on their whole operation, she seems like the more likely choice.

She Has The Motive

The only time Hiram and Hermione have really come apart as a team was when Hermione carried on her affair with Fred Andrews. And who was the first victim of the Black Hood? Fred Andrews. Maybe Hermione is the one that ordered the hit on Fred out of embarrassment, panic, or a renewed surge of devotion to her powerful husband... Fred was the perfect place to start the string of violent attacks, making it seem like a sin-obsessed vigilante. From there, Hermione was able to select a series of easy targets in order to create chaos among the people of Riverdale.

Basically, Hermione is the Littlefinger from Game of Thrones of Riverdale. First by hiring the Serpents and then with the Black Hood, she was able to create chaos and climb it like a ladder all the way to the top of the food chain. The Lodges have been able to easily take over land and businesses piece by piece, paving the way for their grand end game: The for-profit prison complex in Sodale.

Hiram instructed Archie to go on the offensive with the Red Circle, then later prompted Reggie to take the Dark Circle rogue. All of this chaotic action made Fred look weak in front of the citizens of Riverdale, as though he couldn't control his own son. Ultimately, the person this serves best is Hermione, as she's the one running for mayor and hoping to gain full control of the town.

She Knows About Dark Betty

Clearly, as shown from Archie's bizarre evil apprenticeship with Hiram and the way both parents encouraged Veronica to enter into the family business, the Lodges have no qualms when it comes to manipulating children. Therefore, why wouldn't they have chosen Betty, the editor of the school paper and Alice Cooper's daughter, to use as a pawn in their blind quest for power? After all, Hermione knows about Betty's dark side. It was Hermione who met with the principal after Betty and Veronica exposed Chuck in that frightening episode back in Season 1, all of which went down at the Lodges' house, by the way. Who's to say that Hermione didn't have cameras that let her see the whole thing, and know exactly what buttons to push with Betty to get her to snap?

Maybe Veronica told her mom — unwittingly, or maybe even on purpose — about Polly's babies, or even about Betty's obsession with Nancy Drew? Either way, Betty and Hermione have enough connection to each other via Veronica at least to make it plausible, and Hermione's fraught relationship with Betty's mother even adds another layer of motivation.

Is it a coincidence that the Black Hood is such a crappy shot? Out of a half a dozen attacks or so, he or she has only got a couple real fatalities under their belt (RIP Midge). Is it possible Hermione really only is using the Black Hood as a means of creating public unrest, and doesn't actually want anyone to get permanently hurt? That would explain why she was so calm and willing to continue on the campaign trail after the shootout at the debate.

Kaitlin Reilly of Refinery29 made an additional connection in relation to Hiram Lodge being behind the Black Hood, but I think it could also apply to Hermione. When Betty finally gives up Nick St. Clair's name to the Black Hood, why doesn't the Black Hood go ahead and kill him? The mysterious voice says it's because he wasn't "a son of Riverdale," but neither was Miss Grundy. What's more likely, Reilly suggests, is that the Lodges chose to spare Nick because they needed to continue doing business with his family. If Hiram really was the mastermind behind the Black Lodge, what was to stop him from using the Black Hood to go after Nick once he learned about his attempted rape of Veronica? He seemed more than happy to find out that Archie had gone and beat him up while he was in the hospital. No, this knack for restraint and careful calculation is a hallmark of Hermione, not her husband.

With just two episodes left in Season 2, we'll find out soon enough just how much Hermione really knows about the Black Hood murders — and whether or not the rest of the gang can solve this mystery before it's too late. But, my money is on a Lodge pulling all the strings.