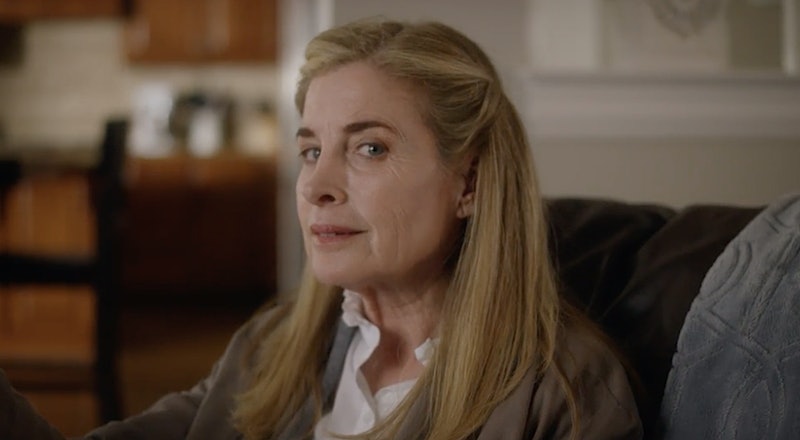 No family is perfect. Despite how things may seem on the outside, there's no telling just what kind of drama goes on behind closed doors, which is a big part of what makes Lifetime's Hidden Family Secrets so intriguing. It's easy to imagine your own family finding a few skeletons in their closet, but how close does this project come to real life, you may be wondering? Is Hidden Family Secrets based on a true story? This eerie tale will make getting together with your family for the holidays seem a little more terrifying than usual (and, for once, not because of the current political climate).

The story revolves around a mother, Melanie, who is doing her best to adjust to life with her daughter Gabby after her husband, Scott, died in a tragic boating accident. Unfortunately, though, this family's troubles are far from over after Gabby goes missing, and if the preview for the movie is any indication, it looks as though Scott's mother could be out for some revenge. After Gabby makes a remark about calling her "granny," Scott's mother tells Melanie that she'll soon know "what it's like to lose your only child." Yep, this person is officially all sorts of creepy. Even if she's not the culprit, she's got something fishy going on.

With that in mind, you'll be happy to know that, like many Lifetime movies that have come before it, Hidden Family Secrets is in no way based on real life events. Granted, that's not to say that family members don't keep things from one another from time to time, but this plot was specifically created to be as dramatic as possible — which makes it all the more enjoyable to watch. So when it comes to the specific members of this family, they weren't inspired by any real-life people. And given how dark and sinister some of these characters appear to be, that's probably a very good thing.

Those interested in tuning in, can learn more about the plot by checking out the official synopsis of the film below:

"Recently widowed mom, Melanie, and her daughter Gabby are adjusting to life after husband and dad Scott died in a tragic boating accident. When Gabby disappears after a heated argument with her mom, authorities and friends fear she’s run away from home. Unwilling to believe her daughter would run off, Melanie is convinced something more sinister is behind her daughter’s disappearance."

As for whether Gabby is able to make it out of this sticky situation remains to be seen, but considering that this is a Lifetime original movie, you better believe there's going to be plenty of plot twists to enjoy along the way. And really, is there any better way to help kick off the holiday season? (That was a rhetorical question since, of course, the answer is no. There isn't.)

Hidden Family Secrets premieres on Friday, Nov. 30 at 8 p.m. ET on Lifetime, so plan your weekend accordingly and let the drama commence!