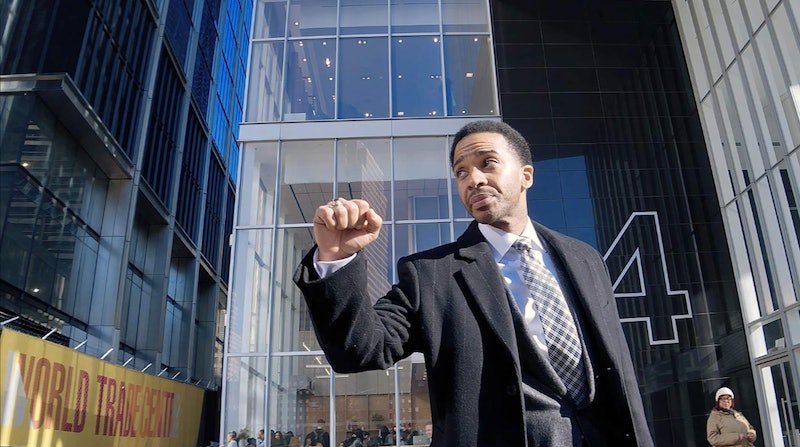 Filmmaker Steven Soderbergh’s upcoming Netflix drama, High Flying Bird comes to to the streaming service on Feb. 8. Written by Tarell Alvin McCraney, who also penned the play Moonlight is based on, is about a months-long NBA lockout, where the owners and players can’t make an agreement. Sports agent Ray’s (André Holland) career is suffering in the process, as he’s at the verge of getting fired by his agency. But Ray sees the opportunity to pitch rookie Erick (American Vandal's Melvin Gregg) a controversial opportunity that’ll help him get leverage. This is a real situation that does occur in the sports world, but is High Flying Bird based on a true story?

Per a GQ interview with McCraney, the film is loosely based on the actual 2011 NBA lockout. But the characters are fictional. Per The Atlantic, the lockout began because the 2005 collective bargaining agreement (CBA), which is the contact between the owners and the players that determines their salary, trades, and other important aspects, expired. So NBA team owners halted everything until reaching an agreement among themselves.

“We'd already taken off the table flashing any sinewy muscles running up and down the court, so the flesh of that is not there. So what are we after? What are we talking about? To me, the best time to look at a character is when they're under duress. Not when things are great but when things are falling apart,” McCraney explained to GQ. “And in the NBA over the years, there have been these moments where a lockout will happen and people start to panic. There are people who are prepared for these moments, and then there are those who are new to the game, or are still living paycheck to paycheck. Like when the government shuts down.”

But the idea to make a film about the business of sports originated from Soderbergh and the film’s star, Holland, who wanted to show a side of the industry that is rarely portrayed on film. In an interview with The Hollywood Reporter, Soderbergh shared how the story came about.

“We were both excited about the idea of a project that basically gave you a look behind the kimono of how these large-scale sports leagues function, and to ask the question how we all feel about the commoditization of athletes,” explained the director. "We were kind of kicking that around and we said let’s think about a what-if scenario and let’s keep the time-frame fairly compressed. We talked about Sweet Smell of Success a lot, because I wanted to use that as kind of a template. And we decided that the NBA and to imagine what a contemporary version of what a lock-out would look like was very fertile ground.”

The film focuses on the power dynamic at all levels of the industry, particularly how white team owners and sports lawyers have so much control over black basketball players’ careers. In the GQ interview, McCraney mentioned a scene where Kyle McLachlan’s character, who is one of the NBA team owners, pushes boundaries to intimidate Ray. The writer didn’t reveal what happens in the scene, but mentioned that it mirrored some of the experiences he has had in real life as a black man.

“To be fair, not in basketball! But I've had those experiences. Absolutely. Absolutely. As a young and upcoming black person in this industry there have been moments that I have been intimidated by older white men who have said things like, 'You're going to be fine and you shouldn't be a disruptor. You shouldn't interrupt what's happening. Everything's going to be fine, get out of the way,’" explained McCraney. “Yeah. Absolutely. That's why I put it in the sauna. Steven and André were like, 'Why in the sauna?' It’s because we can tell privilege and comfort by what spaces people think they own. And so you're at your local gym and think, 'Oh, well, we all own a piece of this, right?' But there are folks who walk in there like, 'Nope, I still have more rights to this than you do.’”

Even in industries where people of color are at the forefront, there's still oppression at the hands of the white and wealthy. With this film, Soderbergh and his collaborators are bringing that incongruity to the forefront.