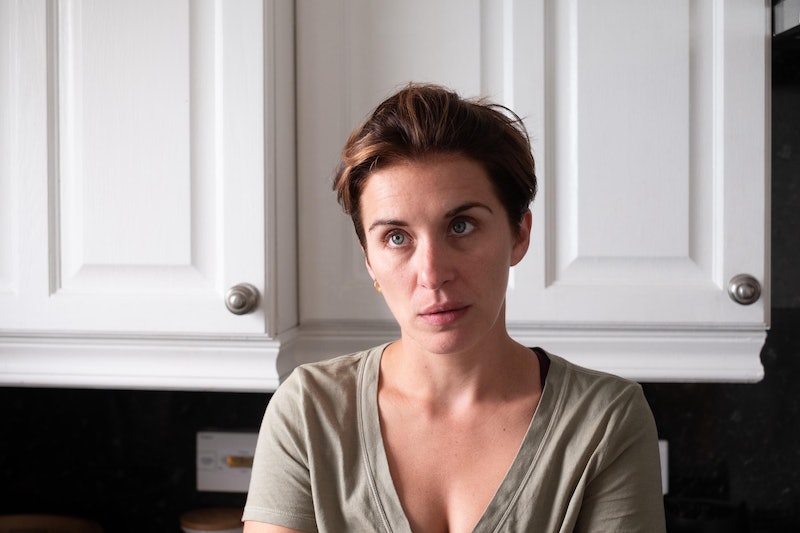 Channel 4’s three-part anthology series I Am provides emotionally raw and visceral snapshots of three women as they navigate significant periods of their lives. Directed by Dominic Savage, each episode of the I Am series was created in partnership with its lead actor to capture a unique and intimate perspective from their own experiences. The anthology opens with I Am Nicola, which follows Nicola (Vicky McClure) and her partner Adam (Perry Fitzpatrick) as they traverse their increasingly tumultuous and coercive relationship. But is I Am Nicola based on a true story?

Thanks to the partnership between the lead actors and Savage, each part of the I Am series feels uncomfortably real. In the case of I Am Nicola, McClure used her own experiences and the stories of others to bring a sense of realism and believability to Nicola and her relationship with Adam. “There are elements of the story that I’ve experienced, whether that be in my own past or in a friend’s relationship,” the actor told Bustle UK. “You discuss things with friends and you might watch something on the telly, whatever it may be.”

“We’ve dramatised it obviously […] but there are lots of different elements that ensure that it’s not a true to life story but there’s lots of moments in this that I feel are relatable.”

It also demonstrates how difficult it can be to notice that you’re in an unhealthy relationship. To viewers, it looks obvious, but Nicola has to figure it out through different signs and situations between her and her partner. “It’s not violent, it’s not overtly awful, but it’s something that when someone is in it, they can’t necessarily see it for what it is,” Savage explained in a press statement sent to Bustle UK.

“[T]he idea of it was to create something, a story that dealt with the detail of a relationship like that. What’s underneath it, the kind of moments in between and really explore it almost forensically.” He added:

“That was the point, I wanted to make something where someone doesn’t just stick with it and put up with it, where someone subtly and gradually changes and decides it’s not right and they can’t do it anymore. So, it’s the story of the nature of that emotional control and how it develops, how it gets worse and how it, as much as she wants it to change it doesn’t change. So, she has to change, and she has to leave.”

To add to the realism factor, each part of the series is heavily improvised by the actors who are also captured by a camera hidden around the set. Not Big Brother-style, but as producer Krishnendu Majumdar told Bustle UK, the set and location were live — as in, the house that it was shot at was actually the real home of a young couple.

“Dominic works with a very minimal crew on set. It’s literally the camera and the boom and Dominic hidden somewhere on set,” he explained. “Everyone else is out, usually on a film set there could be 40/50/60 people around.”

This approach is the same for the following two parts in the series, I Am Kirsty and I Am Hannah, which both cover completely different subject matters but still involve the actors Samantha Morton and Gemma Chan in the same way as McClure, lending to a truly captivating anthology series.

I Am Nicola, the first of a three-part drama anthology series, airs at 10 p.m. on July 23 on Channel 4