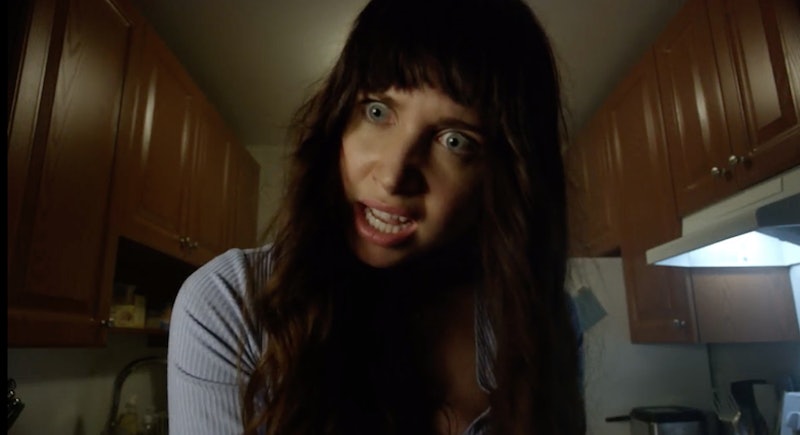 How far would you go to correct the mistakes of your past? It's a concept Lifetime's new original movie Identity Theft of a Cheerleader takes to the extreme as a 30-something woman, full of regret, attempts to go back to high school by stealing a cheerleader's identity, therein allowing her the chance to hit the reset button on her life. But is Identity Theft of a Cheerleader based on a true story? It'll definitely make you rethink trying out for any squad in the near future.

Thankfully, this appears to strictly be a Lifetime creation, plain and simple. These characters and this rather unbelievable storyline aren't based on any real people or events. They simply exist for pure entertainment purposes, like so many other Lifetime movies that have come before it. The plot is equal parts outlandish and ridiculous, but only in the best way possible. That is, after all, what makes these types of movies so enjoyable to watch. They're over-the-top in all the right ways that makes it impossible to look away.

Of course, the concept of having one's identity stolen is a very real problem many people have faced out in the real world. According to a Consumer Affairs report, in 2018 the Federal Trade Commission processed 1.4 million fraud reports, which came to a total of $1.48 billion in losses. Of those reports, the most common fraud complaints involved imposter scams, debt collection and identity theft. However, when it comes to this specific story, fear not — it's a complete work of fiction.

The official synopsis for Identity Theft of a Cheerleader reads as follows:

"During her senior year of high school, Vicky dropped out of school; a decision that her mother made clear would land her a future of little to no success. Now thirty-one-years old, Vicky is at rock bottom. Desperate and miserable, she decides to “steal the identity” of a high school cheerleader to re-do her final year. Determined that this time it will be different and that she will finally make her mother proud, Vicky will do anything to be the number one girl in school, including backstabbing and silencing those that get in her way."

The last part of that description feels particularly ominous. How does Vicky plan on silencing those who could get in the way between her and the new future she hopes to create? The preview clip certainly seems to indicate that things could take a violent turn and result in some bloodshed, making the backstabbing comment both literal and figurative. Just think of it like Never Been Kissed if the film had been written as a horror movie.

Needless to say, this story is guaranteed to leave you on the edge of your seat until the very end, even if the premise is totally ludicrous. Vicky's intentions may have started out relatively innocent, but in trying to mend old mistakes, it seems as though she's about to create brand new ones that won't be able to be undone.