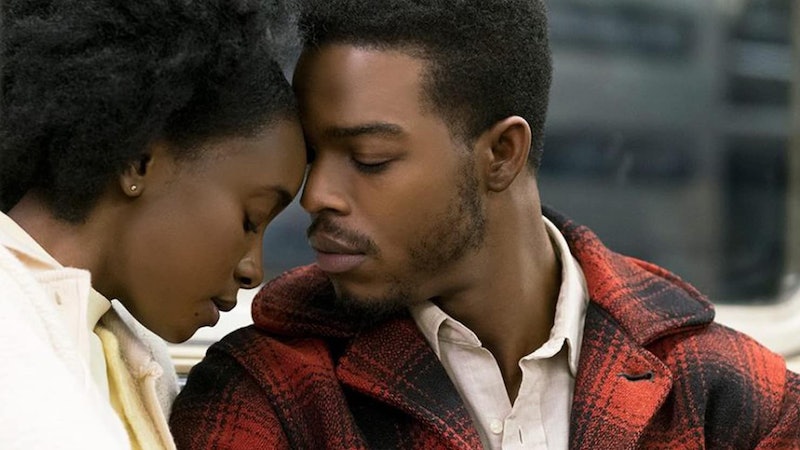 Spoilers ahead. In early '70s Harlem, childhood friends Fonny (Stephan James) and Tish (KiKi Layne) fall in love. When 19-year old Tish finds she's pregnant, she has the full support of her family to build a life with Fonny...but their caring can't protect the young couple from a hostile world ready to destroy them at every turn for daring to hope while Black. When Fonny's arrested for a crime he didn't commit, Tish is determined to set him free before their child is born. Their story is poignant and timely, but If Beale Street Could Talk isn't based on real events.

Barry Jenkins' film is an adaptation of the James Baldwin novel of the same title. While neither is based on any specific story, both the film and novel articulate the struggle of just existing as a person of color, including what Tish calls the disease killing their generation — a creeping feeling of worthlessness reinforced by looking around and seeing a world working against you.

Though the book was written and the film takes place in the '70s, it seems that little has changed to present day. According to Slate, actor James said he based his performance on the all too recent and tragic case of Kalief Browder, a young man who committed suicide after being held in Rikers for three years without trial. "These things have been happening for so long," Jenkins said in the same article. "And we never had the technology to verify that they were happening. So what do you think happened to people in these instances where there wasn’t technology to verify if these things did or did not happen?"

In a Guardian interview on the book's release in 1974, Baldwin explained his writing process this way — that the characters push their way in to you and say they're here, and you have to listen, and you listen even if it's a lot, and then one day they say goodbye and go out into the world. The film and book are narrated from Tish's point of view, and an IndieWire interview notes both Baldwin and Jenkins, as men working from the point of view of a young woman, proceeded very cautiously. Baldwin asked friend and esteemed author Toni Morrison for advice, while Jenkins heeded warnings from female filmmaking friends about scenes that could read as "male gaze-y". In the same interview Jenkins said the risk of voiceover seeming like a crutch and working with a voice not quite his was worth it. “It was one of the very first choices I made, because, part of that was, sh*t, Baldwin’s voice is amazing. I mean, it’s Tish’s voice we’re hearing, but really, ultimately it’s Baldwin’s," he said.

And though he claimed character came to him, Baldwin put his own life into Beale Street, directly and not. He claimed to be an optimist in the same Guardian piece, and that all poets are, but that “you have to reach a certain level of despair to deal with your life at all. If you’re black, and short, and ugly, and pop-eyed, and you think maybe you’re homosexual though you don’t know the word, and you’ve got to support a family because your father is dying — that’s a stacked deal.”

The sense of life being stacked against Fonny and Tish makes Beale Street a heartbreaking story, but the couple's fierce and defiant hope supported by small kindnesses and love — the optimism that buoys them in a harsh reality — is what makes it a masterpiece. If Beale Street Could Talk is in theaters Dec. 14.