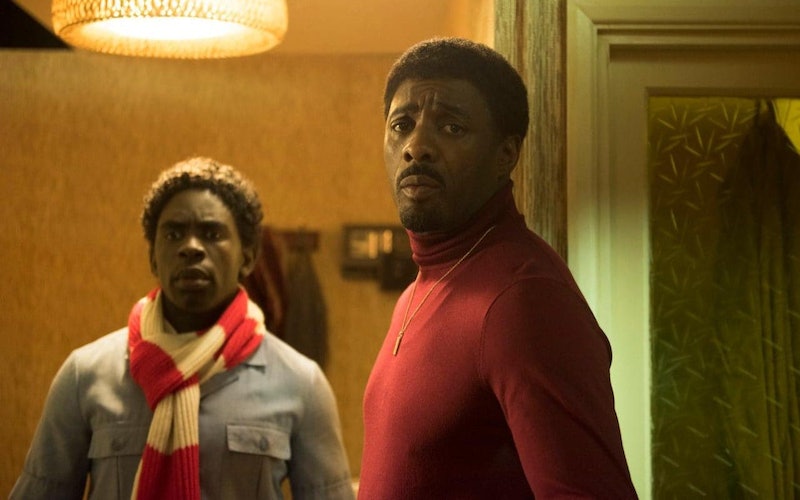 In The Long Run / Sky

Sky's In The Long Run has returned for a second series, and viewers can look forward to yet more hilarious adventures of the Easmon family. The series is based within 1980s East London, and is co-created by Luther's Idris Elba, who stars in the comedy alongside the likes of comedian Bill Bailey. But is In The Long Run based on Idris Elba's real life? Here's everything you need to know about the sitcom.

According to the Independent, the series is a semi-autobiographical sitcom, and based on Idris Elba's own childhood. Speaking to the publication back in 2018, the Cats star revealed that elements of his past life are displayed throughout the comedy, but made clear that In The Long Run is not "a carbon copy" of his real life. Describing the origins of the series, the actor said, "It’s a bit of a mish-mash, to be honest. It really is just a good look at the Eighties, which was when I was turning from boy to teenager. It’s looking at what London was like then, especially east London, where I came from," and added, "it’s really weird sometimes looking up, seeing parts of my life being displayed. Remember, though, that this isn’t exactly a carbon copy of my life: this is its own thing."

During an interview with the Radio Times, Elba also revealed that his formative years were the main source of inspiration behind In The Long Run, and discussed how his 2015 Sky Arts comedy drama, King for a Term, was a springboard for the sitcom we know and love today. Elba, who plays the character of Walter Easmon, also claimed that the appeal of the series derives from people "who want to step outside" of a sometimes overly-sensitive modern culture, and describes the show as being "just laugh with a community of people that you can relate to. One way or another."

According to The Sun, the series was created by Elba himself, and is produced by the actor's own production company Green Door. The comedy centres around the Easmon family who reside on a council estate in Leyton, East London, after moving to the UK 13 years prior. A second series was confirmed by Sky earlier in the year, reports the Metro, and in addition to Elba, comedian Bill Bailey, Neil D’Souza, Madeline Appiah, Kellie Shirley, and Jimmy Akingbola have all returned to the sitcom.

The show's first series debuted back in 2018, and went on to receive critical acclaim, with one review from the Guardian describing the comedy as being "a joyful portrait of community and camaraderie, of home and belonging, of dreams and joie de vivre." Another glowing review from the Daily Mail praised the show's warmth, and noted that the series is "as much about what binds people together as it is about what divides them."

Well, after a reception that strong, I'm very much looking forward to the next chapter, and you can watch In The Long Run series 2 on Wednesday, October 16 on Sky One and Now TV.

More like this
Alan Carr's 'Changing Ends' Is A Witty Sitcom Based On His Own Life
By Darshita Goyal
9 Time Catherine Cawood Was An Absolute Badass In Happy Valley
By Sophie McEvoy
Twitter Simply Couldn’t Cope With The ‘Happy Valley’ Finale
By Sophie McEvoy
Olivia Colman Stars In First-Look Trailer For BBC's 'Great Expectations'
By Sabah Hussain and Sam Ramsden
Get The Very Best Of Bustle/UK
Sign up for Bustle UK's twice-weekly newsletter, featuring the latest must-watch TV, moving personal stories, and expert advice on the hottest viral buys.