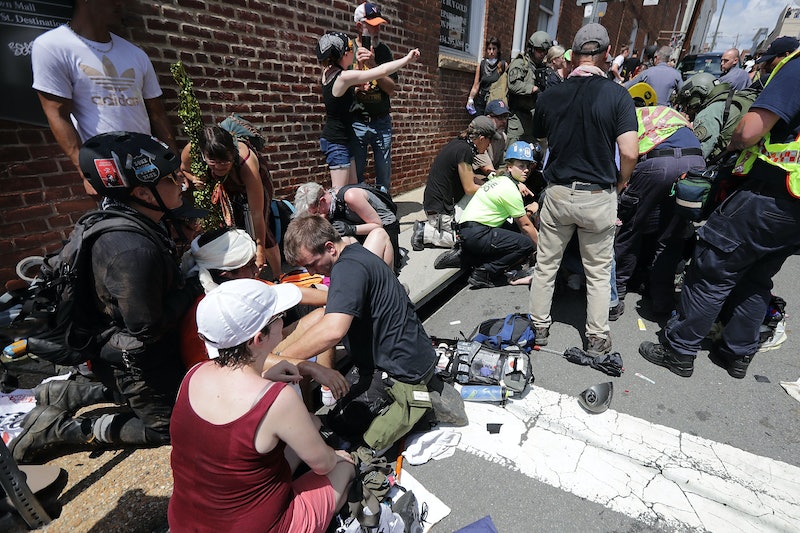 On Saturday morning, the growing cultural tension from racist members of the alt-right came to a head. Thousands of white nationalists gathered in Charlottesville for a Unite The Right rally to protest the city's decision to remove a statue of the Confederate Gen. Robert E. Lee. Since there were outbreaks of violence before the rally officially began, it's reasonable to wonder is it safe in Charlottesville?

In the hours leading up to the rally, Virginia Gov. Terry McAuliffe declared a state of emergency and urged constituents to keep their distance from the scene.

"In advance of (Saturday's) rally there have been communications from extremist groups, many of which are located outside of Virginia, who may seek to commit acts of violence against rally participants or law enforcement officials," wrote McAuliffe in a statement. "In the event that such violent or unlawful conduct occurs, I have instructed state public safety officials to act quickly and decisively in order to keep the public and themselves safe."

A few hours after the rally began, a car plowed into protesters before hitting two other vehicles. Witnesses said the gray car was speeding through the Downtown Mall before it hit several people. Shortly after, the Charlottesville mayor Mike Signer confirmed that one person died from the crash. "I am heartbroken that a life has been lost here. I urge all people of good will--go home," wrote Signer.

On top of the tragic death, there are also 19 reported injuries. A Virginia State Police spokesperson told The Washington Post that "injuries in crash range from life threatening to minor."

Following the outbreaks of violence, president Trump made a speech about Charlottesville. However, in his speech, Trump avoided directly calling out the thousands of white supremacists for the violence. Instead, he painted with broad strokes, in effect, including the anti-racist protesters in his indictment.

Many fear the violence will continue to escalate without more specific indictment of the white supremacists from the president.

"By not calling out white supremacists, fascists and neo-Nazis by name, Trump gave em a wink and a nod — he has their back. #Charlottesville" musician and activist Bill Madden wrote on Twitter.

So, at this point, the answer to the question of safety in Charlottesville is a resounding no. And the larger question may be, is it safe in the United States?