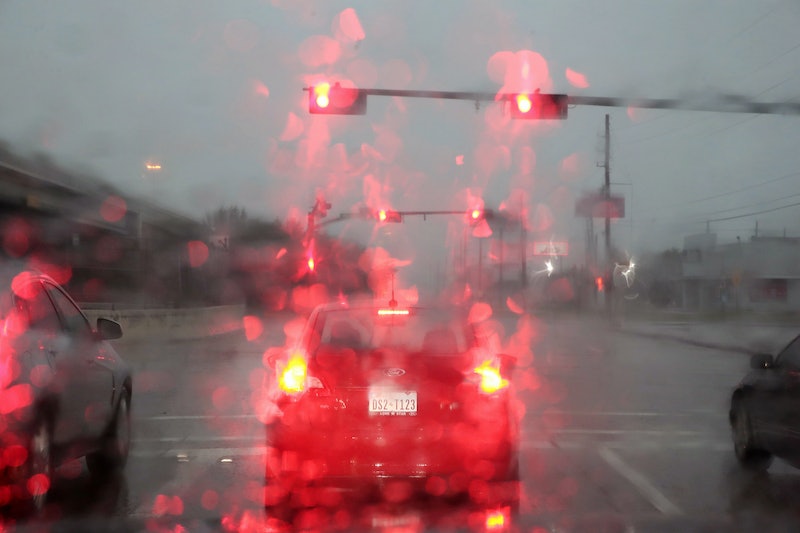 One of the strongest storms in decades hit Texas Friday night, causing damage and discord in some parts of the state. People in the most devastated areas should be prepared to hunker down for some time, because experts advise abandoning a primary mode of transportation. Driving during Hurricane Harvey may not be safe, so try to stay off the roads unless you absolutely have to.

Much of coastal Texas is at or below sea level, making city streets prone to flooding. Houston has had several deadly floods in the past two years — many of the victims were trapped inside their cars when flooding hit. Just because there's a temporary break in the rain doesn't mean that it couldn't start again or leave you stranded somewhere, or worse. Power may also be out at stoplights and streetlights and debris could obstruct the streets, all of which hinders the ability to drive safely as well.

If you absolutely have to go somewhere, walking is your best bet. You should be stocked up on all the hurricane supplies already, and driving around just because could still be dangerous. If you need medical help, reach out to 911 first — even if you live in a remote area, medevac helicopters should be available for storm response. And if you think it actually might be safe to drive in your area, Chron.com has gathered pictures of the damage from around the state that might convince you otherwise.

Harvey has now been officially downgraded to a tropical storm by the National Hurricane Center, but that doesn't mean the danger is gone. The storm is going to stick along the coastline and head northeast toward Houston, further increasing the likelihood of deadly floods according to ABC News. It's currently projected to turn and head inland on Tuesday still west of Houston, but up to 35 inches of rain are projected for the city already. Plus, Harvey's path could still change and dump even more water over the Bay City.

Hurricane parties and days off of school and work are tempting reasons to head out of the house right now, but it's much safer to stay indoors while Harvey passes by. Whatever errand or boredom-induced trip you were planning on making isn't worth potentially losing your car or your life. Play it safe and cuddle up with a good book until local authorities say that it's safe to return to normal daily activities.