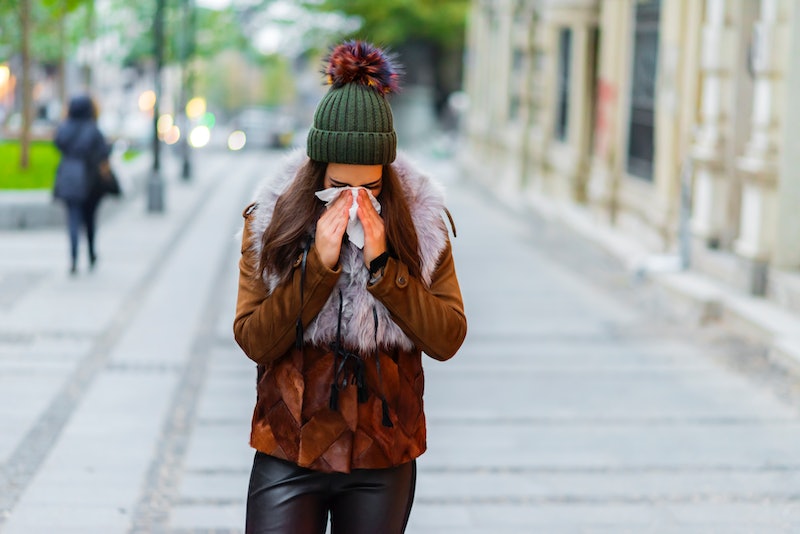 After being taken down last year by the flu, and feeling worse than I've ever felt in my life, I decided not to take any chances this time around. If you haven't gotten yours yet, and you're wondering if it's too late to get the flu shot for the 2019-20 flu season, it's definitely not. Dr. Niket Sonpal, a New York City-based internist, gastroenterologist, and faculty member at Touro College of Medicine, tells Bustle that doctors recommend you get the flu shot by the end of October, but that doesn't mean you can't get it later.

Similarly, the U.S. Centers for Disease Control and Prevention said on its website that although the end of October is what's recommended, it's never too late to get the flu shot. "Vaccination can still be beneficial as long as flu viruses are circulating. If you have not been vaccinated by Thanksgiving (or the end of November), it can still be protective to get vaccinated in December or later," the CDC noted on its official site. "Flu is unpredictable and seasons can vary. Seasonal flu disease usually peaks between December and March most years, but disease can occur as late as May."

So if you're on the fence about getting the flu shot, there's still time to protect yourself, and Dr. James Wantuck, chief medical officer and co-founder of virtual health platform PlushCare, tells Bustle that there are benefits to getting vaccinated during flu season no matter when you do it.

"Getting the flu shot almost anytime is still worthwhile. There is no downside except for the tiny needle in your arm," he says. "The flu shot's effectiveness wanes a bit as the season wears on, so getting it very early can slightly reduce its effectiveness. The later you get it — that just means you weren't protected early in the season."

And while it's true that getting a flu shot isn't a 100% guarantee that you won't get the flu, it could make your symptoms less severe. A 2017 study published in the journal Clinical Infectious Diseases found flu-related deaths among vaccinated people who got the flu were lower than those who didn't get the vaccine.

In addition, a 2018 study published in the journal Vaccine found that vaccinated people who did get the flu, and were admitted to the hospital, were 59% less likely to be admitted to the intensive care unit. Overall, vaccinated people who still got the flu experienced less severe symptoms and recovered faster than those who didn't receive a flu vaccine.

In past years I rationalized not getting the flu shot by telling myself that since I'd never had the flu, I didn't need to worry. I also thought that since the flu shot is not 100% effective that it wasn't worth getting. Let me tell you something — that flu I had last year was so awful and lasted for so long that even if I get the flu again, knowing it will shorter and less severe because I got the flu shot is extremely comforting.

You can get the flu shot at most pharmacies, and it's generally free if you have insurance. If you don't have health insurance, check to see if your city or town is offering free flu shots. My city has free flu shots through December. The bottom line is that the best way to increase your chance of remaining flu-free this flu season is to go and get the shot ASAP. It only hurts a little.