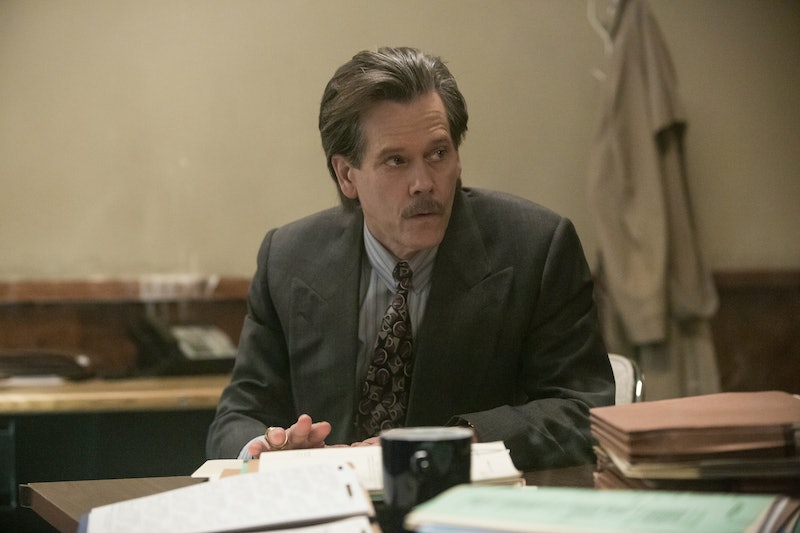 Showtime's City on a Hill,takes place during the Boston Miracle of the early 1990s — a police effort that infiltrated the most destructive gangs and transformed the city's law enforcement strategy. Although the story is based on historic events, its characters, including City on a Hill's FBI veteran Jackie Rohr (Kevin Bacon) are entirely fictional. Rohr is a true corrupt anti-hero who teams up with District Attorney Decourcy Ward (Aldis Hodge) from Brooklyn to take down a dangerous Charlestown family of hockey-masked armored car robbers. It's an interesting tale, and one that the Boston Globe has likened to a lesser version of The Wire.

The two are polar opposites — Ward is an outsider prosecutor who simply wants to do the right thing — but end up working well together to get the job done. When the criminal brothers get caught in the act, Boston police realize that Rohr and Ward's efforts are applicable to the entire city's justice system and thus, the Boston Miracle is born.

Bacon's character mirrors many he's portrayed in the past — minus the iffy Boston accent. Rolling Stone calls Rohr the typical "Boston asshole" who uses drugs and cheats on his wife, but remains an influential law enforcement official. "What used to make this city great was that it was run by bad men who understood that they were bad," he says at one point during the show. In an interview with CBS News, Bacon said he enjoyed portraying the unlikable man. ("I treat everyone the same," Rohr barks in another scene. "Bad.")

"It was a good time in my life to play somebody who could not shut up, and that's this guy," he said. Then he semi-apologized for his character's imperfect Bostonian accent. "Ya know, you're from Boston, you're going to think it's terrible," Bacon said. "That's the thing you just have to resign yourself to!" To the show's credit, The Boston Globe called the cast's performed accent as a whole not "too bad."

The technical term for the Boston Miracle was Operation Ceasefire, and was actually developed by criminologist David M. Kennedy. Kenendy is a professor of criminal justice at John Jay College of Criminal Justice in New York City. After the success of Operation Ceasefire, he opened the National Network for Safe Communities which is a research center that "provides proven, evidence-based, life-saving violence reduction strategies to dozens of communities across America," per its website.

It applies the circumstances of the Boston Miracle to a larger scale and claims that the number of "chronic violent offenders" in most crime-stricken communities are actually quite small, and they're also the ones who are at the most risk of being victimized. Kennedy went on to create multiple other influential crime prevention programs and his work has received multiple high-ranking awards, including two Webber Seavey Awards from the International Association of Chiefs of Police.

Initiative leader Rohr is definitely not as highly decorated as Kennedy, and is much more unethical. But hey, everyone knows that crooked cops makes for better TV.