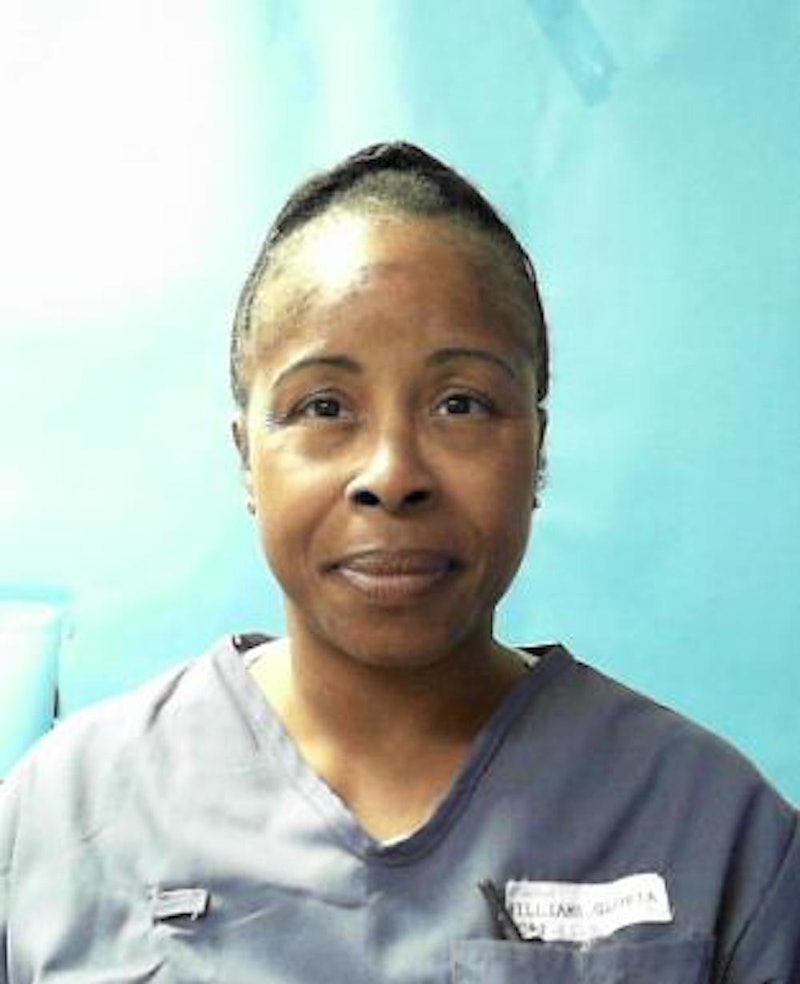 Lifetime's Stolen By My Mother: The Kamiyah Mobley Story follows the true story of Kamiyah Mobley, who Gloria Williams kidnapped in 1998 —when Kamiyah was an infant — and raised as her daughter under the name Alexis Kelli Manigo for 18 years. As reported by The Florida-Times Union, Williams was convicted for the abduction in 2018, and according to Florida inmate records, she's still in prison. However, she could be out relatively soon.

Per ABC News, Williams posed as a nurse, checked in on Shanara Mobley and her recently delivered baby, and told Shanara the baby had a fever, taking her out of the room to examine her. She then left the Jacksonville hospital and drove home to Walterboro, South Carolina, where she raised Kamiyah from infancy to adulthood. According to First Coast News, Williams later claimed that she'd kidnapped Kamiyah because she'd recently "suffered a devastating miscarriage" and that she wasn't in her "right state of mind" at the time of the crime.

As reported by the Post and Courier, Kamiyah didn't discover the truth about her identity until she was 16, when she realized she didn't have a social security number to provide on a job application. Williams broke down and told her the whole story, offering to turn herself over to the police, but Kamiyah didn't want that. Instead, she kept Williams' secret for two more years until law enforcement found her.

Kamiyah told ABC News in 2018 that she remains in contact with Williams and still calls her "mom." She visits Williams in prison, and they call each other often. At the same time, Kamiyah has been getting to know her biological family. "I've gone to [see them in] Florida several times ... and I call them. We talk almost every day," Kamiyah said.

That same year, the Florida Times-Union reported that Williams took a plea deal that capped her potential sentencing at 22 years versus the life imprisonment sentence she would face if the case went to trial. She pleaded guilty to kidnapping and interfering with a child's custody. The judge sentenced her to a maximum of 18 years, but First Coast News reported that it's more likely that Williams will be out in closer to 14 years. "I mean, she'll still be alive [when she gets out]. They didn't give her like 30 or 45 [years]. She'll come out walking and talking. It's fine," Kamiyah, who is now 21, said in the aforementioned ABC interview.

In 2019, Williams appealed to have her sentence reduced, according to First Coast News. She self-filed the appeal and called the 18 years "cruel and unusual punishment" that was "disproportionate" to the crime she committed. Her appeal was denied.

Per Williams' inmate record, she's currently housed at the Hernando Correctional Institution in Brooksville, Florida. If she doesn't get an early release, she's set to be out by at least July 9, 2034. At that time she'll be 68 years old and Kamiyah will be 36.

More like this
This First Look At 'The Gold' Shows Jack Lowden In A Whole New Light
By El Hunt and Sam Ramsden
The Dog & His Handler In 'Gunther’s Millions' Are Worth, Well, Millions
By Gretchen Smail
A New Netflix Doc Will Explore The Unsolved Murder Of Jill Dando
By Sam Ramsden
The 'Gossip Girl' Reboot Creator Is “Looking For A New Home” To Air A Potential Season 3
By Brad Witter
Get Even More From Bustle — Sign Up For The Newsletter
From hair trends to relationship advice, our daily newsletter has everything you need to sound like a person who’s on TikTok, even if you aren’t.