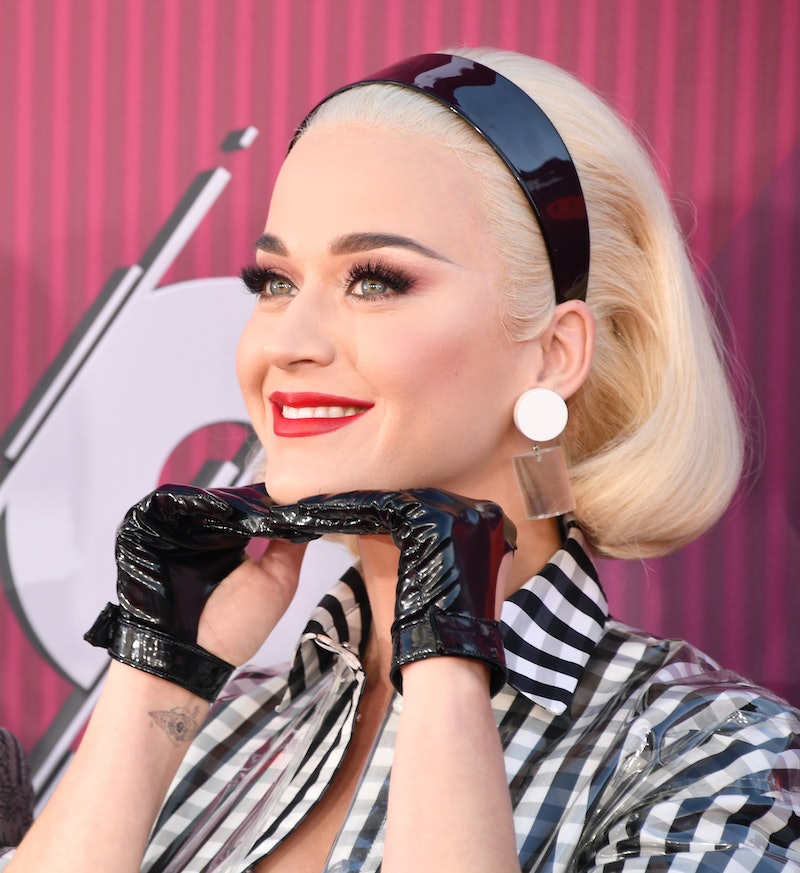 The KP6 era is upon us. Katy Perry is dropping the new song "Never Really Over" on May 31, and it might just be an introduction to her sixth album. In the cover art for the track, which was shared on social media, Katy Perry has long, orange hair. She is serving up quite an '80s look with her voluminous, brushed out waves and long layers. But this tangerine tint is totally new tress territory for Perry. It's a dramatically different cut and color that Katy Cats haven't seen before.

And that's really saying something. For most of her career, Perry has been a coif chameleon who changes shades, shapes, styles, and lengths on the regular. She has experimented with every color under the sun, ranging from black to blue to pink to purple. While promoting her fifth album Witness in 2017, Perry debuted a bleach blonde pixie cut. Even though she has since played with additional length, she stopped the swapping out her color as often. She remained firmly committed to the platinum hue for quite some time.

But now everything has changed.

It's quite possible that Perry's new 'do is a wig or is the work of extensions. She has been showing off longer platinum strands at most of her recent appearances.

The aesthetics of the single cover may or may not be an indication of what the music will sound like. You'll find out on Friday when the song becomes available. It's not clear if "Never Really Over" is the first single from her sixth album or if it's simply a one-off release. Whatever the case, Perry fans are thrilled about the prospect of new music and the new looks that herald it. Much like her fellow pop stars Taylor Swift, Rihanna, and Lady Gaga, Perry often changes up her entire look when going into a new album cycle.

In case you didn’t tune into the final weeks of the latest season of Idol, Perry was all about her white hot hair. She opted for long strands that she wore in all sorts of different styles. One week she rocked an updo with face-framing strands. The next week saw a glossy, glamorous high ponytail slicked off her face. She also turned up to the 2019 Met Gala with a chin-length, platinum bob — topped by a chandelier, of course.

Perry also opted for golden blonde, beachy waves back in April of this year. It was certainly a low key style for her. Much like her orange "Never Really Over" locks, this was a look fans hadn't "witnessed" before.

What Perry does next, in terms of her music and her personal style, is anyone's guess. The only certainty is that she's making music again and her loyal fans are so here for it. Perry will continue to show off fresh new looks at performances, appearances, and red carpets. Bring on KP6.