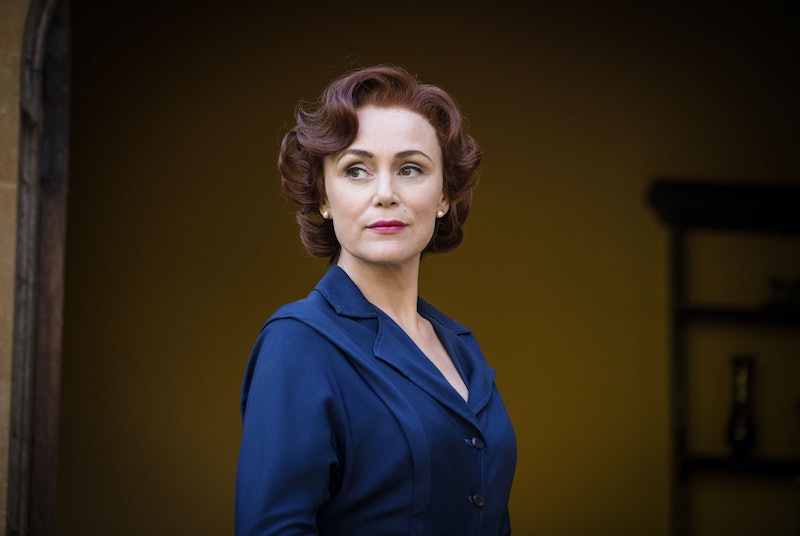 The brand new BBC drama Summer of Rockets follows an innovative designer who is scouted by MI5 to take part in a secret mission within Cold War Britain. The series was created by the acclaimed writer and director, Stephen Poliakoff, and is led by a cast that includes Line of Duty's Keeley Hawes, who appears as the poised and charming Kathleen Shaw. Her character is married to a Tory MP named Richard Shaw (played by Linus Roache) but is Keeley Hawes married in real life?

According to Hello!, Hawes is married to fellow actor Matthew Macfadyen. The couple met while on the set of the BBC drama Spooks, and walked down the aisle back in 2004 — just one month before Kelley gave birth to their first child Maggie. Hawes was previously married to the DJ and cartoonist Spencer McCallum, with whom she has two children named Ralph and Myles.

Speaking to the Evening Standard, Hawes described the moment the relationship with Macfadyen came to be. She said, "Matthew just came straight out with it and said, 'I love you' in the rain one day. I thought, 'Oh dear, here we go.'"

The actor also previously opened up about married life with her former Spooks co-star. In an interview with the Telegraph, she revealed:

"I love being married to Matthew. And I know Matthew loves being married, too. It ties everything up and it’s a statement to each other and to the world. Marriage and being a mother are absolutely crucial to my happiness and my life."

As previously mentioned, Hawes will portray the character of Kathleen Shaw in Summer of Rockets, and during an interview with the BBC, the actor shed more light on the details surrounding her new character. She said:

"She is a politician’s wife and very much a woman of her time. Everybody in the show has secrets and we find out that Kathleen is also hiding something. But because of her position in society, and the fact her husband is a politician, it’s a secret that is kept within the family. This is very difficult for Kathleen, because she is the public face of the family, and must behave as though everything is fine. And of course, it isn't."

Hawes also described Summer of Rockets as "a love letter to film and TV," and said that viewers should give the drama a chance because "it’s about a really interesting period in history. It’s full of fascinating detail and the characters are beautifully drawn."

As reported by the Express, Summer of Rockets is partly based on a true story, and is set during the Cold War era in the summer of 1958. According to the Radio Times, the cast of the brand new BBC drama also includes Toby Stephens as designer and inventor Samuel Petrukhin, Linus Roache as politician Richard Shaw, Mark Bonnar as the mysterious character Field, Timothy Spall as Lord Arthur Wallington, and many more.

Summer of Rockets starts on Wednesday, May 23 at 9 p.m. on BBC Two.