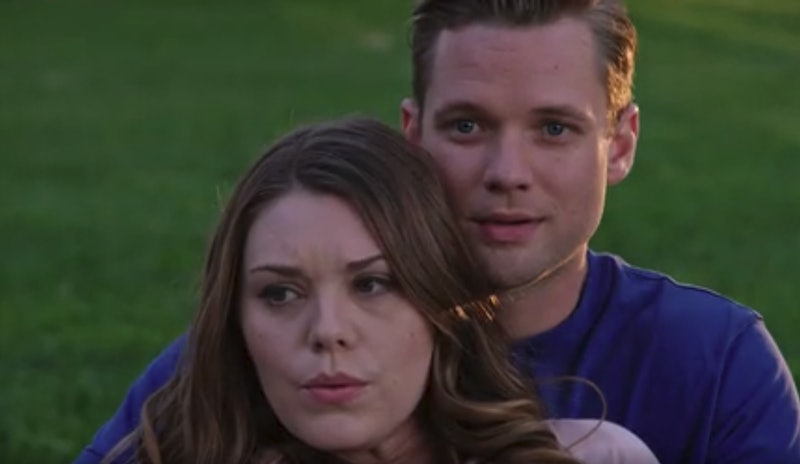 Lifetime is known for thrillers with disturbing plots, but the network's latest original thriller is perhaps one of its strangest tales yet. Killer Single Dad, premiering on July 1, tells the story of an anonymous sperm donor who decides to take his biological child from the mother. Plenty of Lifetime movies find inspiration in the headlines, so is Killer Single Dad based on a true story?

According to Lifetime, Killer Single Dad focuses on a soon-to-be mom named Jennifer (Kaitlyn Black) whose life is saved by Garrett (Cameron Jebo), a stranger who seems to be a nice guy. She doesn’t know it yet, but he is her baby’s sperm donor and has been on a dark mission to “collect” all of kids he has fathered over the years.

In the trailer, Jennifer is seen at a Lamaze class with Garrett, so he's definitely succeeded at worming his way into her life. Her husband Matt (Robert Parks-Valletta) is understandably not OK with Garrett constantly creeping around his pregnant wife; Jennifer says he's just concerned about the baby, but it isn't long before his ulterior motives are exposed.

Killer Single Dad doesn’t seem to be based on a specific true story, but the legal parental rights of a sperm donor are a complicated subject. Of course, a sperm donor resorting to kidnapping — and possibly murder — to claim a child is extreme, but does a donor actually have parental rights to the child? That depends. According to Legal Match, a known sperm donor (one who is not anonymous) may or may not have parental rights and obligations: Factors like the terms of the donor's contract, the means of conception, and local state laws all play a role.

Even with a contract, there have been cases in the past when the sperm donor was able to come after the biological mother or a couple for paternity and/or visitation rights. Per Slate, this happened to Sheena and Tiara Yates, a married lesbian couple in New Jersey. The Yates family conceived both of their sons via an at-home insemination. Both donors agreed in writing not to be involved in the parenting process, but they have since applied for and been granted visitation rights. The Slate report states that under New Jersey law, the biological fathers' initial agreement couldn’t be enforced because the donation did not take place under the direct supervision of a licensed physician.

But in the case of Killer Single Dad, Garrett is an anonymous sperm donor through a sperm bank. The aforementioned Legal Match report confirms that an anonymous donor's parental rights are waived. In some states, the child can seek some basic information about the sperm donor after reaching a certain age.

This makes the circumstances of Killer Single Dad even more extreme, as Garrett clearly has no legal leg to stand on, and it's not clear how he tracks down Jennifer to begin with. It's true that websites like The Donor Sibling Registry, consumer DNA testing kits, and general Internet sleuthing are helping children conceived via anonymous donors track down their donors and vice versa. But how would Garrett have been able to find the kids he sired, especially an unborn child? If he’s a con artist, it is possible that Garrett could have somehow accessed records at a sperm bank, but the details of the story will have to wait until the movie makes its debut.

Killer Single Dad puts a dark and desperate twist on the complicated world of third-party reproduction. Lifetime fans will find out how it all goes down when the movie premieres on July 1.