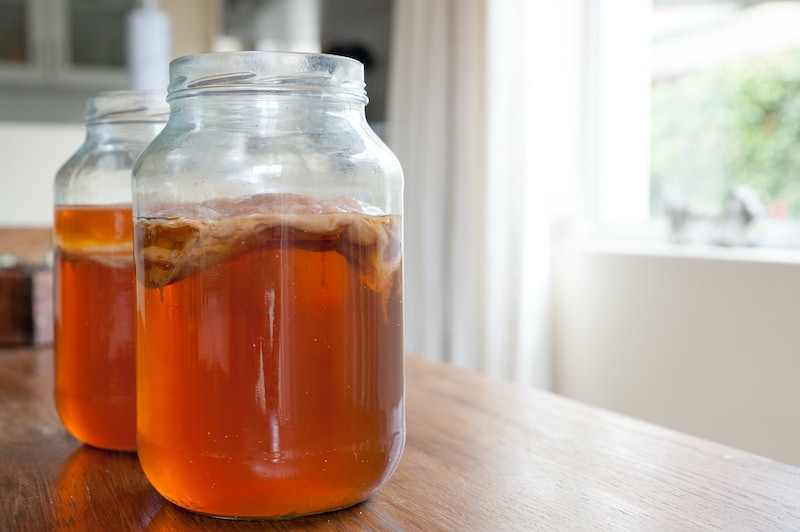 Everybody's into kombucha these days. The fermented tea drink, which is thought to have its origins on the Silk Road in China, is now touted as a gut health booster, thanks to its probiotic qualities. A study in 2012 even found that one bacteria strain commonly found in kombucha reduces genetic damage and inflammation in ways that could lower cancer risk. If you love the sparkly, slightly sour taste of kombucha, you may have wondered about its environmental credentials: is kombucha environmentally friendly? The good news is that largely, the answer is yes.

The process of creating kombucha itself is notoriously low-intensity and can be done at home. "Kombucha is made from either a green or black tea base. Added to that is white sugar, which has been fermented with a type of “tea fungus” called a symbiotic culture of acetic acid (vinegar) bacteria and yeast, or SCOBY, for one to two weeks," Dr Evangeline Mantzioris and Dr. Permal Deo wrote for The Conversation in 2018. "The taste of the kombucha changes during fermentation from a pleasantly fruity sour-like sparkling flavour [sic], to a mild vinegary taste after a long incubation period."

There's nothing very environmentally damaging about this process, even when it's done in factories. The Food Safety Center of Excellence notes that the only real risks of kombucha production in a factory environment is the bacteria itself. "The potential for acid-resistant pathogen growth during fermentation," they said, is "the only significant hazard." And that doesn't really cause problems for the environment; it's more concerning for human health, so the bacterial cultures used in kombucha are monitored very closely.

The major environmental issues linked to kombucha can be traced back to its ingredients, particularly tea. "The global tea industry also has an ugly history of deforesting, damaging biodiversity, and overusing pesticides," reported the HuffPost in 2010, and not much has improved since then.

A 2017 study of the global tea industry, of which China and India are the largest producers, laid out the issues: "Application of weedicides, pesticides, and inorganic fertilizers creates environmental hazards. Meanwhile, insecticides often eliminate the fauna of a vast tract of land. Soil degradation is an additional concern because the incessant use of fertilizers and herbicides compound soil erosion. Apart from those issues, chemical runoff into bodies of water can also create problems. Finally, during tea manufacturing, fossil fuel is used to dry the processed leaves, which also increases environmental pollution." The "water cost" of a cup of kombucha, like a cup of tea, is also high because of the amount of water required to grow the leaves; it's about 34 liters. However, it's far less water-costly than milky drinks, ScienceAlert reported.

And there's good news: it's possible to source sustainable tea to make your kombucha at home. Fair trade and eco-friendly teas exist, and though they may be a little more expensive than regular tea, they'll have less environmental impact, plus you won't have to worry about the environmental costs of shipping or producing the containers. If you buy kombucha, do some research on what kind of teas the kombucha maker uses to create their product (and remember to recycle the bottle); if they aren't committed to environmentally friendly ingredients, the results might be less green than you'd like.