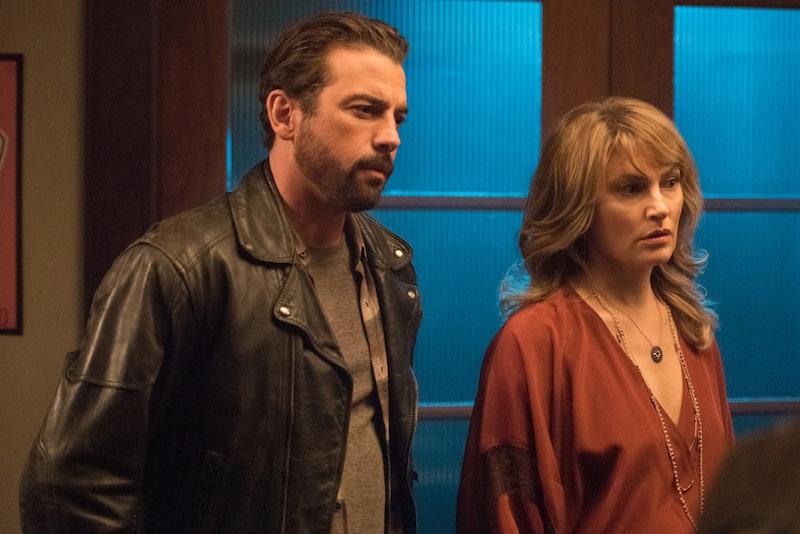 Now that fans know F.P. Jones and Alice Cooper have a son on Riverdale, it's fair to speculate that any new, unexplained character could be their secret love child, Charles — particularly if said newcomer has a dark energy and a mysterious backstory. Like, for example, is it possible Kurtz is Charles on Riverdale? Chic was a red herring, but this fan theory about the Gargoyle Gang member actually makes a lot of sense.

Kurtz appeared seemingly out of nowhere. His dislike of Sheriff F.P. was oddly intense for someone he hasn't met and has no real connection to. Underneath the grease and grunge, his hair has a reddish tinge — like the photos we saw of young Charles in his file from the Sisters of Quiet Mercy. Could this be the real kid, all grown up?

The biggest piece of evidence that Kurtz is Charles, as pointed out by redditors on a theory thread, is that Kurtz supposedly "looked into the eyes of the King" — meaning the Gargoyle King. We know that Charles grew up with the Sisters of Quiet Mercy, and that visiting the Gargoyle King was a regular punishment for children there. If Kurtz's encounter with the King means that he was at the Sisters, this is a plausible theory. He's still deep into G&G, too, and definitely a little unstable. With Alice going to the Farm and F.P. becoming the town's Sheriff, this is the perfect time (story-wise, at least) for their troubled son to reappear.

However, one potential snag in this theory is that Kurtz isn't quite old enough to be Alice's son, considering she had him when she was a teenager. The real Charles is at least a few years older than Jughead and Betty, but Kurtz seems to be in the same grade with them in high school, so that doesn't really check out. Betty also learned from the real Charles' neighbor that he was nice and polite, which Kurtz certainly is not... unless this new personality is the result of fizzle rocks or something. It seems more likely that Kurtz is just another gang member who happens to have it out for Jughead's family.

But whether Kurtz is Charles or not, it does sort of seem like this child is going to show up eventually. Riverdale is too campy and melodramatic to let a character like that go by unseen. It complicates Betty and Jughead's relationship in a weird way, and might give Alice a reason not to sign her soul away to the Farm forever.

Chic told Alice and Betty that the real Charles Smith died. He said that Charles was a junkie and overdosed. However, Jughead and Betty visited the hostel where he was staying and learned from a neighbor that he may not have had a drug problem at all — and was more likely killed by Chic, if anything. So we really can't believe that he's not out there somewhere. Even if it's not Kurtz, don't let go of hope Charles will show up just yet.