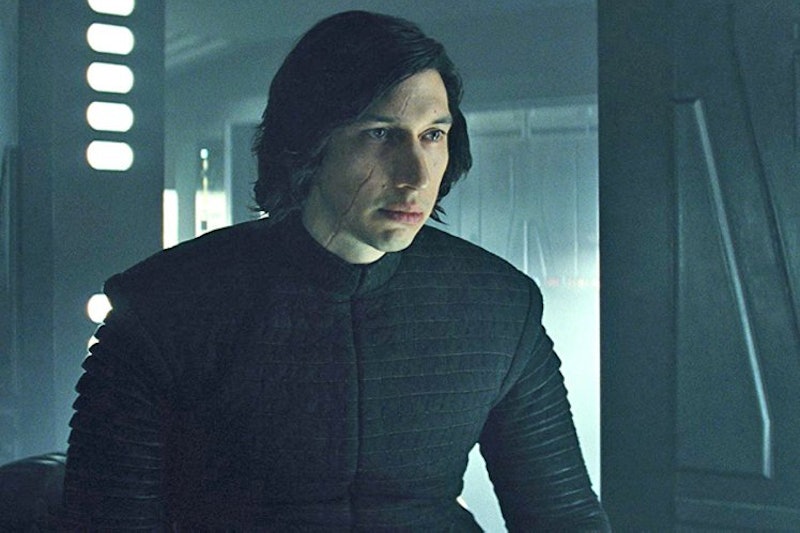 For a franchise known for its severed limbs, lightsaber battles, and ships flying through space, Star Wars also has a surprisingly large share of romance. There's the iconic relationship between Harrison Ford's Han Solo and Carrie Fisher's General Leia, of course, as well as other, more minor pairings between character throughout the series. But now, it looks like we might be in for a new romance — that between two very unexpected characters. Yes, it seems possible that Kylo Ren is into Rey, because in The Last Jedi, the two share a moment that could definitely be seen as a hint at love to come.

If you've seen The Last Jedi, you know exactly what moment I'm talking about. It's when, midway through the new movie, Rey and Kylo are talking via their mental connection, while she's with Luke on the island and he's with the rest of the First Order. As they've established previously, they can somehow see each other, if not their surroundings, so when Kylo takes his "call" with Rey while shirtless, she immediately reacts. She asks him to put some piece of clothing on to cover up, a request that he ignores. It's an awkward moment for the duo, but a hilarious one for the fans watching from their seats.

As well as a possibly romantic one. Although it doesn't seem likely like Kylo and Rey are actually into each other just yet, considering the fact that they go up against each other in battle and fight for different sides, the shirtless scene (as well as some somewhat chemistry-filled exchanges between the duo) could for sure be seen as a hint that a romance could develop later on. Which would be well and good (who's against star-crossed lovers?) — except for the tiny, insignificant fact that we might soon discover that Rey and Kylo are actually siblings.

Yup, these new Star Wars movies could totally be set on repeating one of the most famous traditions in the franchise — that of siblings falling for each other while not knowing they're related. Of course, that's a reference to Luke and Leia, who infamously flirted with each other for a long time before discovering that they're actually siblings. Hell, the pair even kissed (!) in The Empire Strikes Back before realizing that that was seriously not OK.

It doesn't seem that likely that the filmmakers behind the series would try to repeat that tradition straight-out with Rey and Kylo, who are thought by many fans to possibly be related. After all, it's kind of a lazy cop-out, and the shirtless scene might just be meant to be a fun, silly moment to make Rey uncomfortable. But don't completely rule the idea out, because this is Star Wars we're talking about, a franchise that loves nothing more than a good plot twist, especially when it involves a pair of characters fans are invested in.

But keep your fingers crossed that that's not the case, and Kylo and Rey aren't related. If they are into each other, let that turn into a totally normal, not at all weird romance, where they can develop a relationship (or even just a fun, scandalous flirtation) without it feeling super creepy for either them or the audiences. Listen up, Rian Johnson and co: Star Wars fans want to be able to root for our romantic pairs, not feel totally gross because we know the truth behind their relationship, OK?

If Kylo and Rey's relationship does continue to develop in in Star Wars: Episode IX, here's hoping that Rey's parents turn out to be people totally unrelated to Leia or Han, so the duo can have an absolutely regular romance.