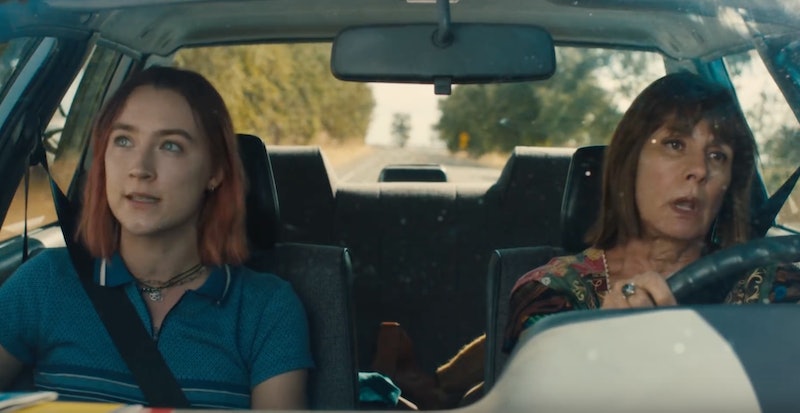 For years, Greta Gerwig has excelled in playing relatable characters in movies like Frances Ha and Mistress America, and now she's moving behind-the-scenes as writer and director of the new, equally relatable film, Lady Bird. Yet despite the movie, out now, having received overwhelming praise for capturing the nature of growing up in the early '00s as Gerwig herself did, Lady Bird isn't a true story.

The acclaimed dramedy follows its titular character (played by Saoirse Ronan), whose real name is Christine McPherson but chooses to go as Lady Bird. During the teen's senior year of high school, she prepares to leave her home town of Sacramento, California for the opposite coast, which she idealizes as a Mecca for art and culture. Considering that Gerwig grew up in Sacramento and attended Catholic school, like her film's protagonist does, before moving to New York City to attend college and become a filmmaker, it's evident that the story has at least some truth to it. Still, in interviews about the movie, Gerwig maintains that she and Lady Bird couldn't be more different.

In an interview with Rolling Stone, the filmmaker explained, "I really colored within the lines," when describing her high school years. "Writing this character was an exploration of all these things I didn't have access to or I couldn't be. In that way, it almost felt like this fairy-tale invention of a deeply flawed heroine, but one who I admire. I think she shows courage and a lot of character even when she's flailing," Gerwig said. Additionally, while talking to Variety at the Toronto Film Festival, she clarified exactly how fictional the film is. "None of the events in the movie literally happened in life, but it all has a core of emotional truth that feels close to life," Gerwig explained.

Part of what makes the movie resonate so much with audiences is its portrayal of the way Lady Bird clashes with her mom, Marion (played by Laurie Metcalf). Lady Bird dreams of leaving her nest for new opportunities— and which high school senior doesn't? — but Marion finds the teen's dreams unrealistic and frustrating. The mother-daughter relationship in the film is one of its most realistic parts, and Gerwig drew from her own experiences for that, too... Sort of.

"Laurie's character is nothing like my mother" Gerwig told Rolling Stone. "But the core of it felt like this deep love and sense of conflict that comes out of the fact that you’re essentially the same person.” Even if the exact mother-daughter dynamic wasn't necessarily true to life for Gerwig, she still related to it, as many of the movie's audience members probably do as well. "The core of that relationship is very close to me," the filmmaker told Rolling Stone.

Similarly to how people say that New York is the fifth main character in Sex and the City, Sacramento is another important part of Lady Bird, and another true-to-life aspect for Gerwig. In an interview with Variety, she explained that she'd set out to create a film that honored her hometown. "I felt like it had not been given its proper due in cinema," Gerwig said. In a way, it's funny that she decided to honor her hometown of Sacramento with a character who decidedly hates it, but that contradiction between Lady Bird's great city and the character's outright rejection of it is another way that this movie nails the essence of growing up. No matter how great a place may be, some 18-year-old likely wishes to get away from it and move onto something they deem better.

Even if you don't exactly know what it feels like to desperately wish to move across the country to either New York, or "at least Connecticut or New Hampshire," as Lady Bird says in the trailer, you likely will relate to some aspect of this film. Whether it's the tumultuous mother-daughter relationship or simply the fashion and music of 2002-2003, so much of this film is realistic and honest. It may not be exactly true to Gerwig's life, but the great deal of heart that she put into the movie is apparent for anyone who watches it.