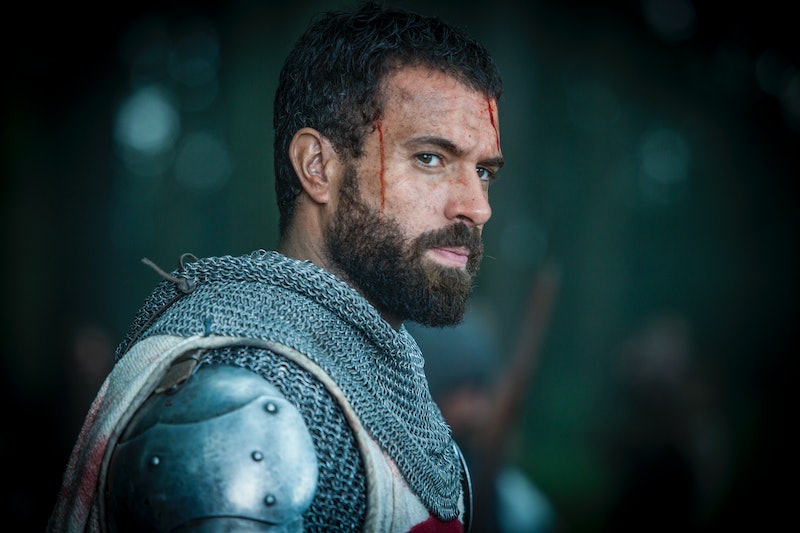 Between Pope Boniface VIII, Queen Joan of Navarre, and King Philip IV of France, History's new drama series, Knightfall, features a number of real-life figures. Landry, played by Downton Abbey's Tom Cullen, isn't among them, but the character does have some roots in history.

Landry is described as the courageous, headstrong leader of the Knights Templar, a real Catholic military order that traces back to the 12th century. As a boy, Landry was left at the steps of an orphanage, where he was found by nuns and brought up in the church. But after a failed mission to retrieve the Holy Grail — the cup that Christians believe Jesus used at the Last Supper — his beliefs are shaken, and he spends the season on a steadfast mission to find the Grail, restore his faith, and rediscover himself in the process.

According to Encyclopedia Britannica, Landry's cavalry — the Knights Templar — was founded around 1119 by French nobleman Hugh de Payens and a small group of his companions. After Jerusalem was recovered during the First Crusade, many Christians made pilgrimages to various sites within the Holy Land, but these kingdoms lacked the military force necessary to safeguard incoming visitors. In response, Payens and his comrades vowed to protect these pilgrims and began to foster a religious community around their newfound purpose. As their knighthood evolved, they took oaths of poverty, chastity, and obedience, renouncing the world and pledging themselves ready to die for their faith, following in the footsteps of Cistercians and other monks.

They also expanded their duties from beyond the pilgrims, mounting a broad defense of the Crusader states and racking up bitter rivalries along the way — one of which, with King Philip IV, is quite present in Knightfall.

As noted by The Guardian, the Knights Templar's presence has waxed and waned over the last few centuries: they were dissolved in the 1300s, then revived as a movement in Paris in 1804, rededicating themselves to protecting the Holy Lands through diplomatic, not military, means. Today, they're recognized as a non-governmental organization with special consultative status from the United Nations, and have hundreds of representatives around the world.

Landry, for his part, doesn't appear to be based on a direct person, but it's clear he comes from a long line of dedicated soldiers. He likely evokes many of the qualities they championed, but has a fictional backstory. As writer and executive producer Dominic Minghella told TV Insider:

“Knightfall has the fun of sword fighting and ­battles, but they’re not fictional fantasy knights. They were a remarkable band of brothers. These were real people.”

Of course, because it's television, Knightfall will weave in some more emotional stakes, too. Though previously celibate, Landry eventually falls for a woman, and there will come a point where he "has to choose between being a monk and being a lover," Minghella continued. But by and large, he's backed by a rich history that should make him feel real, even if he technically isn't.