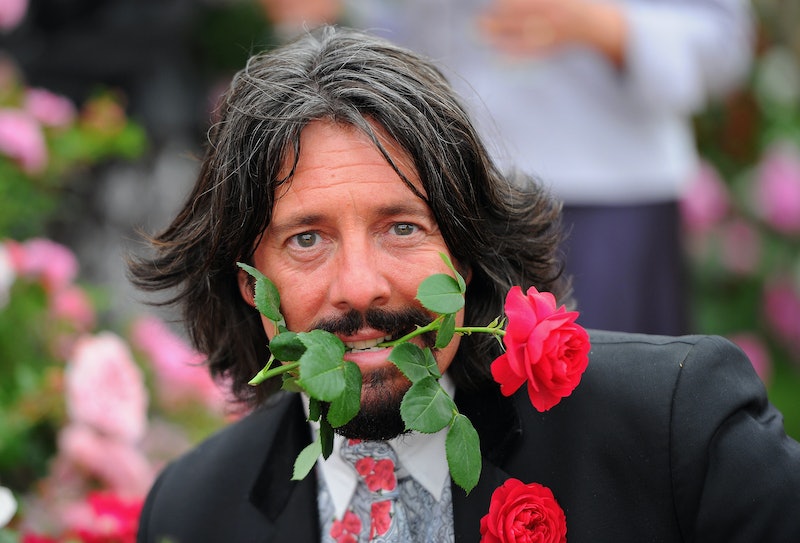 Laurence Llewelyn-Bowen is arguably one of the UK's most loved interior designers. Literally nobody wears a floral print like him and, y'all, I bet you several people have used his image as inspiration at the hairdressers. Those locks! I mean, this designer is not only an icon but a flipping catch. So, understandably, many fans may be wondering, is Laurence Llewelyn-Bowen married?

OK guys, sad news for those interested in Llewelyn-Bowen in that way: the former Changing Rooms host is married. But good news for those interested in really cute romantic stories: he and his lovely wife Jackie Llewelyn-Bowen have been married for a remarkable 30 years, and they are the ultimate couple goals. Speaking to Hello back in 2014 to celebrate their 25th anniversary, Laurence said that they are the best of pals. While also teasing her like any best mates would, the designer said:

"We've got a 30-year friendship that gets better and better. I worship the ground on which her knuckles drag."

The happy couple have two daughters together, Cecile and Hermione. When asked recently by New Idea about the secret to their long and happy union, Laurence said:

Laurence and Jackie welcomed their first grandson Albie into the world a couple of years ago and are really enjoying the whole experience. Speaking to Gloucestershire Live, Laurence explained that Albie is the reason he and his wife are choosing to stay put in their family home, rather than go to Asia or Australia, where Laurence is a huge star:

"There are three people in our marriage right now and one of them is my grandson. And he is far cuter than I am."

Laurence is best known and loved in the UK for his time on the hit show Changing Rooms, in which neighbours did each others' house up in super speedy time, often with hilarious outcomes. In terms of '90s nostalgia, it's about as good as it gets. Laurence provided not only entertainment on his own terms, but TV gold when he repeatedly went a little too (shall we say) out there for some home owners. One particularly memorable episode was when he did a room up in lots of garish animal print and red and the owner described it as a brothel, as the Mirror reports:

Since then, Laurence has been a bit absent from UK screens as he has been making some coin over in Asia and Australia.

Luckily for us though, Laurence will be on UK screens again, pride of place on Celebrity Painting Challenge on BBC One, Thursday April 4 at 8 p.m. The show will see celebs competing to see who is the best artist. There will even be a life drawing class featuring Lily Allen's dad Keith Allen, according to the Radio Times, which I am sure will be pretty special.