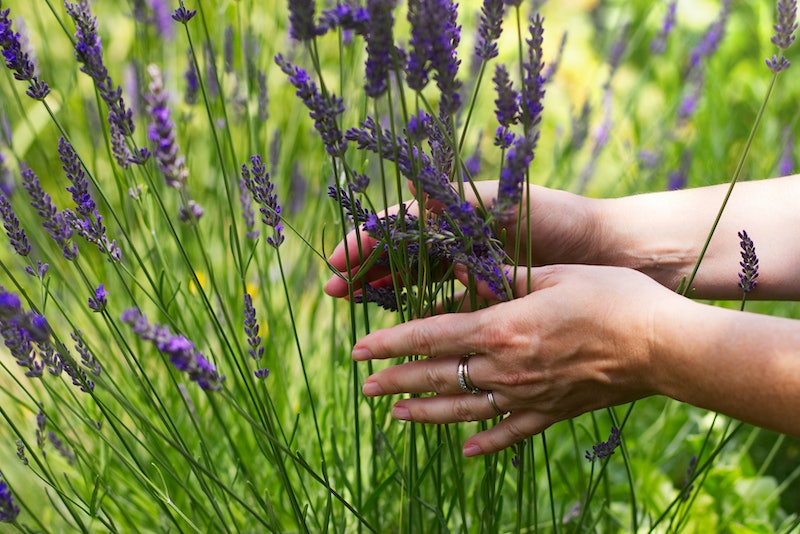 From its delicate purple hue to its earthy floral scent, everything about lavender seems tailored towards encouraging thoughts of serenity. And as it turns out, science agrees. In a recent study published in the journal Frontiers in Behavioral Neuroscience, researchers discovered that for mice, taking a whiff of linalool, an alcohol component in lavender extract, was akin to "popping a Valium,” as The New York Times put it. Essentially, sniffing a key element of lavender’s unmistakable scent had an anxiety-reducing effect in mice — an effect that wasn’t observed in mice with no ability to smell.

While there have been past studies assessing the anxiety-reducing effects of lavender, there was little investigation into the effects of the odor in particular. Notably, this wasn’t the researchers’ first look into lavender — in a previous study, they identified that out of the six various odourant molecules they examined, linalool significantly increased the pain threshold in mice.

Though the effects were not tested in humans, these results aren’t exactly a surprise. Lavender essential oils are synonymous with the scent of spas and yoga studios everywhere, and you’re likely to spot a barrage of lavender room sprays and candles in the lifestyle section of any retail store. Even the ancient Greeks and Romans apparently believed the scent of lavender was soothing to untamed lions and tigers (unclear how they discovered this fun fact).

Dr. Hideki Kashiwadani, a physiologist and neuroscientist at Kagoshima University in Japan and one of the study authors, told The New York Times that he suspects the observed effects of linalool may be applicable to humans and other mammals, though this is yet to be tested. It’s an interesting prospect, considering that anxiety disorders are the most common mental illness in the U.S., affecting around 18 percent of the adult population, according to the Anxiety and Depression Association of America.

The study exposed test mice to linalool vapor via filter paper inside a custom-made chamber to see if the scent induced relaxation. The mice exposed to linalool were more open to exploring their surroundings, suggesting they were less anxious than the control mice. Also, the chilled-out mice didn’t exhibit motor impairment (aka acting like they were drunk, so to speak), which is an effect documented in studies of mice on benzodiazepines, a drug used to treat anxiety.

The linalool didn’t work when the mice’s ability to smell was blocked, implying that the effects were, in fact, triggered by scent, and that in order to work, linalool triggered odor-sensitive neurons in the nose that send signals to certain areas of the brain. Basically, the study found that the olfactory system was key for inducing anxiety-reducing effects. The findings help lay a foundation for further exploration of the potential clinical uses of linalool odor (or other lavender-derived compounds) in anxiety treatments.

If you, like me, are too impatient to wait until that day comes, consider these uses of lavender for your own self-care: You can perfume your bathwater with lavender essential oils or a fizzy bath bomb to help relax, drink lavender-infused tea for potential health benefits, and the fragrance may have beneficial effects on insomnia. For now, I’ll use this study to help justify my insanely overpriced lavender-scented candle addiction.