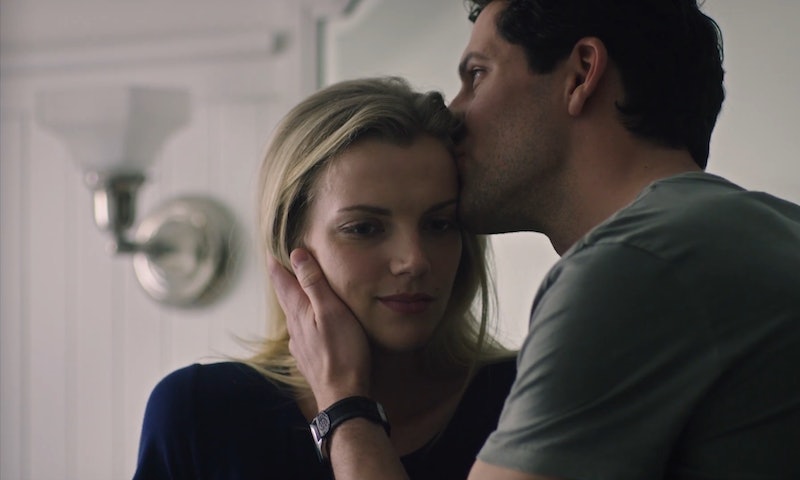 Traditionally, almost every woman on Lifetime has a husband with a secret. Sometimes even more than one. It's a formula that's been done about a billion times before, and there's a reason for that — it works. Cliche as the plots can sometimes seem, who doesn't love to spend a night balled up on the couch with a bowl of popcorn, screaming "don't trust him!" at a TV movie's heroine? If this is your passion, there's a new one hitting the small screen — so is My Husband's Secret Life a true story?

There appears to be no reason to believe that the show is based on any specific couple, but it certainly pulls from struggles real-life women sometimes face. According to the description on Lifetime's website, the movie focuses on Jennifer, who begins to uncover her husband's lies after she suffers a miscarriage and he falls into a coma after an accident. Apparently the film was produced in Canada and originally billed under the name Sleeper, and the title was changed up prior to its air on Lifetime, perhaps to better appeal to American audiences.

It's a plot fans seen variations of before, but one that certainly has enough nuance to potentially pull out some unexpected stops. There's also talent behind the show, too — Jennifer is played by Kara Killmer, who fans will recognize from NBC's Chicago Fire. These kinds of movies remain one of Lifetime's staples, both in terms of original content and movies the network picks up to air, and the films continue to endure even as the network makes a name for itself in critically acclaimed TV series and other more unique content.

Network insiders have maintained that it never wants to rid Lifetime of the more formulaic TV movies that made it successful in the first place, the network just wants to build on that foundation. “Look, I’m a big believer that a lot of the elements of the old Lifetime movie — like the melodrama and the female aspect of it — are really important,” Lisa Hamilton Daly, Lifetime’s vice president of original movies at the time, told the Washington Post in 2015. “It’s just finding a newer take on it and finding a new way to tell those stories.”

Lifetime has definitely taken women's stories and produced content that's received more critical acclaim than the old school films they may be best known for. The network's original series UnREAL earned two Emmy nominations and recently returned for its third season, and Allison Anders nabbed an Emmy nod for directing Ring of Fire, a June Carter Cash biopic, and those are just a few of Lifetime's notable projects in recent years. Just because these have been hits and allowed the network to be taken a little more seriously, Lifetime hasn't let up on the good old fashioned dramatics of its roots. "People love a great story,” Rob Sharenow, Lifetime’s executive vice president and general manager, said in the same Washington Post piece. “And I think at their heart, Lifetime movies are always about great drama and pure storytelling. That’s what it is, as simple as that."

And My Husband's Secret Life, despite its new title that unfortunately could lump it in with countless other TV movies, seems like a genuine thriller. There's a way to make compelling, exciting and dramatic movies about women without making the protagonist some kind of damsel in distress or pushing a tired narrative, and that's really what Lifetime has been striving for in recent years. If My Husband's Secret Life's trailer is any indication, viewers could be in for a ride that's both familiar and intriguing.