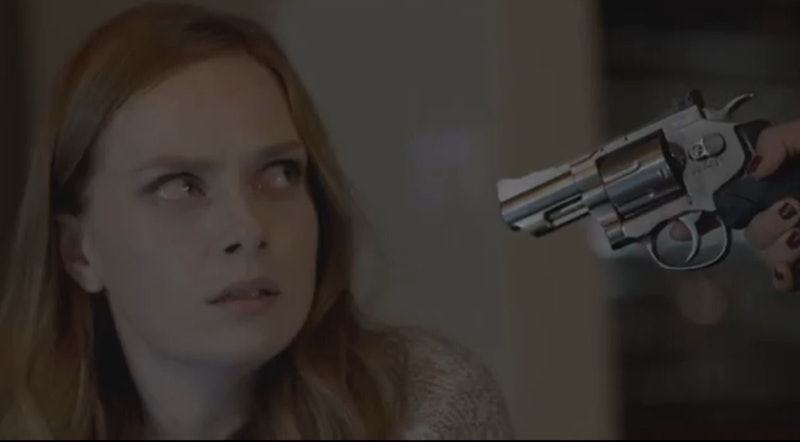 In many Lifetime original movies or series, you can find copious amounts of drama and you can sometimes find a claim that the plot was based off a true story. After all, who among us doesn't love to see a fictionalized version of a thrilling story ripped right from the headlines? Lifetime's newest movie, The Perfect Soulmate, spins a terrifying tale about a woman living a seemingly perfect, charmed life with the "perfect" husband. Of course, this unblemished existence ends up being a facade when it is discovered that this couple is hiding dark secrets about their relationship behind closed doors. So, is The Perfect Soulmate based on a true story?

Well, The Perfect Soulmate is not being advertised as being based on a true story. It is standard procedure that when Lifetime makes a film that pulls a plot from a real event, they usually make it a point to advertise it as such. The possibility of seeing a real event, even if it is dramatized, is always a huge draw for viewers. I would assume that the network would make sure to mention it in any advertising of the film, if it had any roots in a real case.

Of course, just because The Perfect Soulmate is not based on a true story as far as I can tell, that doesn't mean that you should forego checking it out altogether. Based on its description, it looks like it is going to be a favorite for any fan of thrillers. The plot follows a woman named Sarah, who places her successful career as a published poet on hold to become a wife and mother. Her life appears from the outside to be everything anyone could want. She has a loving, successful husband and a big house. You know, all the material things that the outside world tends to look at as a barometer for happiness. Of course, there's always a twist. As Lifetime writes in the film's description:

"Despite his polished persona, Sarah's husband is controlling, manipulative, and abusive. Isolated and desperate to escape her marriage, Sarah welcomes the newfound attention of one of her devoted fans, a bookish young woman named Lee Maxson. But as Sarah gets closer to Lee, she begins to discover that she’s found an ever more dangerous companion."

I don't know about you, but I really want to know who this person she meets online could be. Is it the work of her husband, trying to trap her? Is it someone from her past? Who is this obsessive companion? To find out, make sure you tune into Lifetime this Sunday at 8 p.m. for the premiere of The Perfect Soulmate.