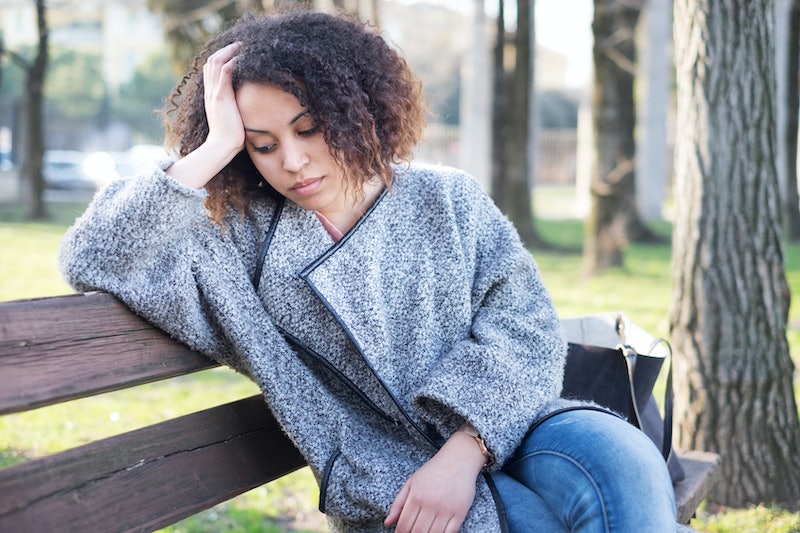 In January of this year, Prime Minister Theresa May appointed Tracey Crouch MP as Britain's first ever Minister for Loneliness. As reported by the BBC, the post was created in response to the findings of the Jo Cox Commission on Loneliness, and it's Couch's specific job to combat the isolation faced by millions of Brits. Given the prevalence of the problem, questions have been raised as to whether considering loneliness as a mental health issue might be valuable, and it seems there are plenty of reasons why this would be a worthwhile idea.

Looking at the statistics, it seems that many Brits encounter feelings of loneliness more acutely than some other nations. In 2014, the Office of National Statistics reported the findings of a survey which asked its inhabitants if they felt they have someone they could rely on to help with a problem. Of the 28 European countries, the UK ranked 26th for those answering positively, leading outlets like The Telegraph and The Independent to label the UK "the loneliness capital of Europe."

Within the UK, loneliness is typically associated with older people who may not have family close by and are unable to get out and about much. Age UK, for example, recently reported that some 1.2 million elderly people are "chronically lonely." But millennials are often overlooked when it comes to being lonely, too. Thanks to trying to save money, the solitary nature of social media and technology, and busy working lives leaving little time for leisure, many of us are lonely. Looking at everyone's *perfect* lives on Instagram can make us feel like trying to keep up with everyone else is futile. The rental culture doesn't help, either. The millennial struggle to buy property and lay down roots means our neighbourhoods and housemates can feel transient. And while there are specific charities like Age UK and Contact the Elderly designed to help combat loneliness among older people, there is less structure for younger people.

It's no surprise, then, that a more recent survey by the Office for National Statistics found that those aged 16-24 experience loneliness more often than those in older age groups. It also found that women reported feeling lonely more often than men.

The link between mental health and loneliness is increasingly in the spotlight, with the charity Mind reporting that one impacts the other. If you are lonely, you are more susceptible to mental health conditions, and if you have a mental health condition, you are more prone to loneliness. Depression, anxiety, and hoarding are all possible results of loneliness, according to Psychology Today, meaning that while loneliness itself might not currently be classed as a mental health issue, it certainly has the ability to trigger one. A study this year in Psychological Medicine showed that young people who self-identified as lonely were likely to smoke, be depressed, be unemployed, and have suicidal thoughts.

Loneliness can also cause physical problems. Three in every four GPs say they see a lonely person in their clinic everyday, according to a study by the Campaign to End Loneliness, and it has a negative impact on physical wellbeing. In fact, a study carried out by a psychology professor at Carnegie Mellon University suggested that people who were socially isolated were more than four times as likely to become unwell.

Arguably, by not classifying loneliness as a recognisable mental heath illness, we're not giving enough emphasis to the damage it can cause. Sufferers may appreciate a recognised condition diagnosis and formalised route for seeking help, especially as young people admitting loneliness is still stigmatised.

In the meantime, perhaps the answer lies in forging bonds with your neighbours and local community, getting out as much as possible, and trying not to compare your life to what you see on social media. If you find yourself feeling lonely on a regular basis, you can get in touch with the mental health charity MIND — they offer advice on how to cope day-to-day. The British Association for Behavioural and Cognitive Psychotherapies (BABCP) can give a list of therapists in your area, if you want to talk to a professional, and the Samaritans are available 24/7 to help with any mental health issues.

And remember — if you're not lonely, someone else might be. A smile and hello goes a long way.