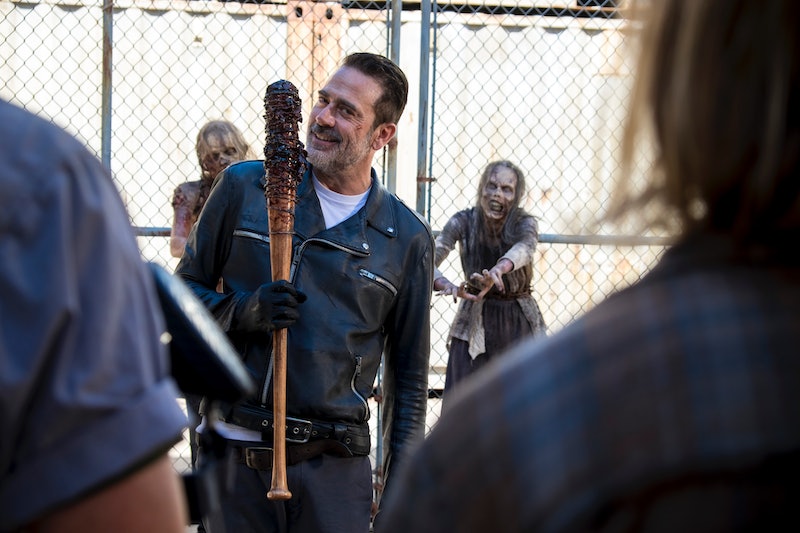 Spoilers for the March 18 episode. In an episode filled with Indiana Jones imagery, Rick took a swing with his nemesis' favorite weapon and BFF... while it was on fire. A crazed move that makes sense only to the two post-apocalyptic leaders, Rick actually seems bent on destroying the bat as well as Negan. Does Lucille "die" on The Walking Dead? As silly as it sounds, her fate is unknown.

In the episode, a car chase ends with Rick and Negan pursuing one another though some kind of abandoned warehouse. Once Rick gets ahold of Lucille, he threatens the barbed bat, lights it on fire, and then starts lighting zombies up all around him. "Don't you hurt her," Negan actually cries. Men are ridiculous. He literally tells Lucille that he loves her before they embark on this mission.

That said, there is a comic book precedent for this. Obviously, comic spoilers ahead. Lucille is dead in the Walking Dead comics. After Dwight wields Lucille for a time, he gives the bat back to Negan. While Negan is trying to take down a villain named Beta, Lucille shatters and breaks apart. While Negan is burying Lucille, yes burying, he reveals that he named her after his late wife — a fact that he apologizes to her memory for doing, especially since the human Lucille was not properly buried. Please, please, let this scene happen on the AMC series. It's only a billion times more dramatic than when Harry Potter's Nimbus 2000 broomstick was destroyed by the Whomping Willow.

At the end of the episode, Negan wakes up in a truck driven by the artist currently known as Jadis, who knocks him right back out. Clearly she survived her solitary escape from the trash heap. Is she working with Rick now, or on her own? Does Jadis have Lucille? Does Rick? She's not visible in that final scene.

Also, what about Negan's potentially continuity-breaking plan to dip weapons in walker blood and use that to infect enemies? If that actually works, Rick could be dying from exposure right now. So could Negan. The survivors on The Walking Dead have covered themselves up in blood and guts (with probably at least some minor open wounds) enough times that it doesn't seem like Negan really thought this one through, but it is something to potentially worry about.

Once again, it seems frivolous that the "death" of Lucille on The Walking Dead would mark any kind of change in the Big Bad — but if he truly grieves for his batty love, he might turn over a new leaf. Carl's death is impacting most of the characters around him in small ways.

Still, it's unfortunate that fans may be deprived of Dwight with Lucille. What is Dwight's deal in this episode? He returns to Negan, doesn't exactly vibe with Simon, and by the end of the episode looks ready to run for the hills (or rather The Hilltop) yet again. In an interview with The Independent, actor Austin Amelio broke down Dwight's conflicted motivations on The Walking Dead at this point on. He said:

“I think he's worried. It's interesting, because he's totally on a mission for revenge and I think he had some morals in the beginning, then he got used to the world and now he has some morals about getting used to the world. I think at this point now with what he's doing, he's like 'Okay, I could die at any second.' I think he just wants to be rid of Negan and do some good in the world. That's what he's focusing on right now. I think they're all hell-bent on trying to get some sort of peace.”

Does anyone else feel like we're headed towards some kind of secret alliance reveal? Sunday's episode started slow, and then all of a sudden Rick is missing, the Saviors all presume Negan to be dead, and Lucille is nowhere to be found either. Who knew that a baseball bat could cause this much drama on The Walking Dead? You know the answer, and the drama probably isn't over yet.

More like this
Will 'The Walking Dead' Return For Season 12?
By Grace Wehniainen
Another 'Sex Education' Star Has Joined The 'Doctor Who' Franchise
By Darshita Goyal
Courteney Cox Recreated An Iconic 'Friends' Scene To Surprise Fans
By El Hunt
'Bridgerton' Just Showed Off A Major Hollywood Celebrity Cameo
By El Hunt
Get Even More From Bustle — Sign Up For The Newsletter