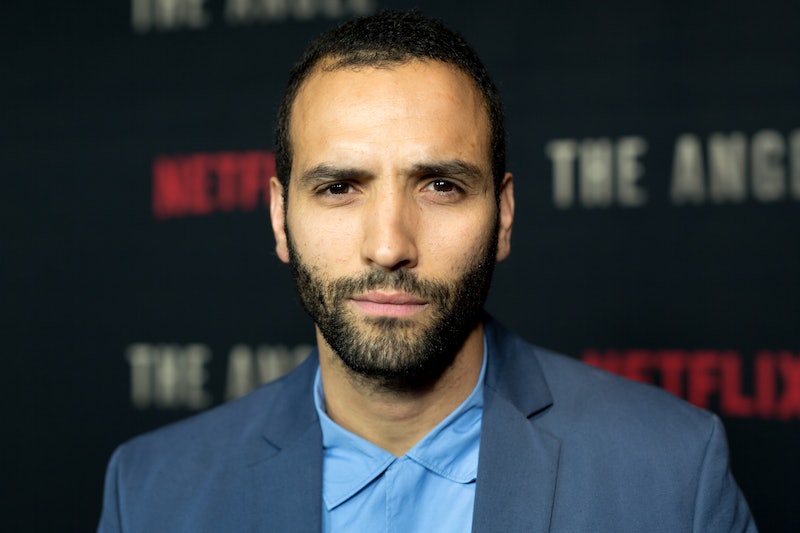 Fans' love for Hot Jafar has only intensified with the release of the live-action Aladdin, in theaters on Friday, May 24. The internet spun into a horny frenzy when, in August 2017, the Hollywood Reporter announced that Guy Ritchie’s live-action Aladdin had cast its antagonist Jafar, the Grand Vizier to the Sultan of Agrabah. Marwan Kenzari, a Dutch-Tunisian actor from the Netherlands, had been cast as the iconically sinister villain — and fans collectively lost their minds, with many contending that the casting choice is much too hot for a villain. Given renewed interest pegged to the film’s release, dedicated fans may be wondering: Is Marwan Kenzari single? Well — and our apologies to Hot Jafar stans — it appears as though the actor is dating a model named Nora Ponse.

In a recent Instagram post at the film's premiere, the actor shared a sweet photo of the two holding hands on the purple carpet. While the actor does appear to have a beau, a former girlfriend actually played a significant role in Kenzari’s decision to enter the bustling world of the entertainment business. According to Variety, the 36-year-old actor began acting as a teenager in his hometown of the Hague, Netherlands after his then-girlfriend signed them up for auditions for a local stage production of Chicago. The rest is clearly history. Kenzari’s subsequent claim to fame was a starring role in the 2013 kickboxing thriller Wolf, in which he played an ex-con kickboxer who becomes immerse in the underground world of crime. His role in the film garnered him a Golden Calf for Best Actor award at the Nederlands Film Festival. Since then, Kenzari has appeared in films such as Ben-Hur, The Mummy, and Murder on the Orient Express.

Along with Kenzari, the live-action Aladdin stars Mena Massoud as Aladdin, Naomi Scott as Princess Jasmine, and Will Smith as Genie. While the film follows the central storyline of the 1992 animated classic, Aladdin will also explore a more fleshed out backstory for Jafar — much to the forthcoming pleasure of Hot Jafar stans. In a recent interview with Entertainment Weekly, Kenzari recalled the moment he learned that Hot Jafar had become a viral sensation.

“I remember the first time that popped up on the internet, I was doing a night shoot on a different movie and someone was tapping me on the shoulder saying, “Hey. have you seen this?” I have to admit, we’re all human beings so it’s always flattering when people show love and you can only be very, very humbly grateful and thankful for the way people see you,” he told the publication. “I obviously understand the fact that when I got the part that, as I said before, I’m a lot younger than the other Jafar, and although I think he has a beautiful face in the cartoon, I was very happy obviously for different reasons the fact that they cast me in the film."

He continued, “Also because I think it’s an interesting intake to bring a young, ambitious Jafar. In terms of the Hot Jafar wave, I thank all the fans and all the people that created that. I was pleased with it. It was certainly flattering.”

Aladdin is in theaters now. Here’s to turning more fictional cartoons from our youths into super hot live-action characters, honestly.

More like this
'The Holiday' Director Just Addressed *Those* Sequel Rumours
By Sam Ramsden
Lindsay Lohan Just Recalled A Hilarious 'Parent Trap' Story
By Sam Ramsden
Then Vs. Now Photos Of The 'Enchanted' Cast In 2007 & The Sequel's Stars In 2022
By Marina Watts
Keke Palmer Paid Tribute To "Other Half" Darius Daulton After Announcing Pregnancy
By Jake Viswanath
Get Even More From Bustle — Sign Up For The Newsletter