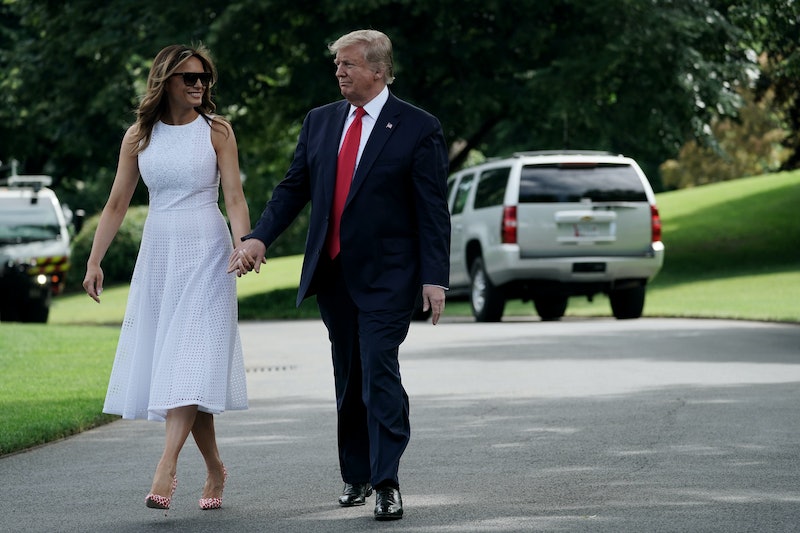 Starting on Friday, leaders from 19 countries and the European Union converged in Osaka, Japan for the annual Group of 20 (G20) summit. As part of this important meeting, world leaders are discussing critical issues ranging from health to development, and they have been joined in Japan by their spouses and partners. However, one person has seemingly been absent from proceedings in Osaka, prompting speculation from social media users. Is Melania Trump at the G20 summit? The first lady did not appear in a photo of all the spouses and partners.

According to Yahoo! Finance, Trump was notably absent from a spouses and partners photo in which French President Emmanuel Macron’s wife, Brigitte, and British Prime Minister Theresa May’s husband, Philip, both appeared, along with 17 others. The photo has drawn criticism on social media because May is the only man in the photo, highlighting the lack of female government leaders in the G20.

However, social media users also drew attention to the fact that Trump was not in the photo — nor did she seem to participate at all in the spouses' trip to Kyoto's Tofukuji temple. Nor did she appear in a photo of the G20 leaders and their partners during a dinner at Osaka Castle.

In fact, it appears that Trump is not in attendance at this year's G20 summit; Bustle has reached out to the White House for comment. Her apparent absence from ongoing proceedings in Japan has prompted many social media users to wonder where she is. One Twitter user suggested that she was at the spa.

Another Twitter user joked that Trump was the one who took the spouses photo, which would explain why she wasn't in it.

Meanwhile, The Washington Post's Amie Ferris-Rotman translated a tweet from a Russian news agency suggesting that the first lady's absence was unfortunate for U.S. President Donald Trump, because she "got on so well with" Russian President Vladimir Putin.

That doesn't mean that President Trump was alone on his trip to Osaka. Although the first lady did not appear to make the journey, the president was joined in Japan by his daughter Ivanka and her husband, Jared Kushner.

"I am looking forward to joining the U.S. delegation for this important meeting on international economic cooperation," Ivanka tweeted on Wednesday, just ahead of her departure.

The first lady's apparent absence from the G20 summit was certainly not the only aspect of the proceedings to make headlines, either. The president also generated speculation and criticism when he jokingly told Putin, "Don’t meddle in the election, President," The New York Times reported, prompting a smile from Putin. Trump then reportedly turned to another Russian official and repeated his comment: "Don’t meddle in the election."

This year's G20 summit marked the first time that Donald and Putin met since the conclusion Special Counsel Robert Mueller's Russia probe, the BBC reported. Donald also drew controversy after shaking hands with Saudi Crown Prince Mohammad bin Salman while being photographed with the other G20 leaders, less than a year after journalist Jamal Khashoggi was killed at the Saudi consulate in Istanbul.