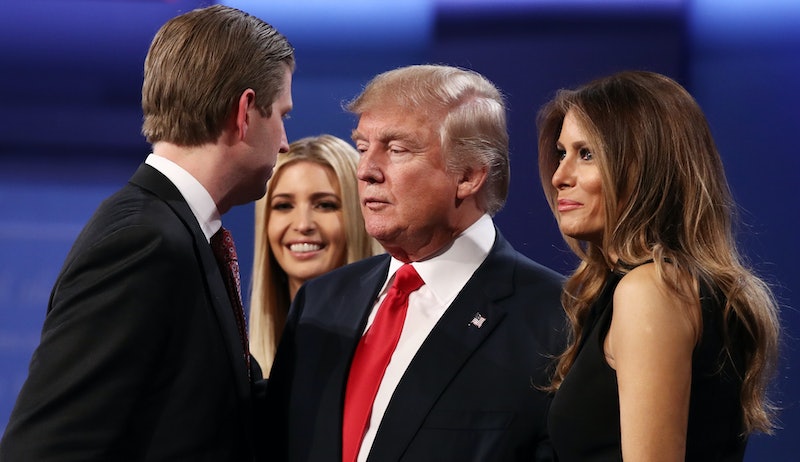 The first lady sometimes chooses to accompany her husband on diplomatic trips. As President Donald Trump prepares to meet North Korea's Kim Jong Un on Wednesday, then, you may be wondering whether Melania Trump is in Vietnam along with the two leaders.

In fact, Melania has declined to join her husband on this trip. Her spokesperson, Stephanie Grisham, confirms to Bustle in a Friday email that the first lady will not go to Vietnam for the summit. Grisham has not yet responded to a question about why the first lady will be absent.

Melania didn't attend last year's summit with Kim, either. Notably, though, that absence coincided with the first lady's general retreat from the public eye as she recovered from a kidney operation. Melania avoided making appearances during that time but did hold meetings and work on projects in private, her spokesperson told CBS.

First ladies have historically taken different approaches to joining their husbands for international meetings. Michelle Obama didn't do so very often, according to The Washington Post. Anita McBride, the director of American University's First Ladies Initiative, explained to the Post that Obama "was very protective of her schedule" and "said she didn’t need to race away from home." She decided to focus more on domestic issues.

Obama's predecessor made a different choice. Laura Bush frequently accompanied her husband on international summits, according to the Post. "Her view was that it was valuable and important for the American first lady to be there," McBride told the Post. Bush also went on many trips of her own; for example, she went to Afghanistan several times to promote girls' education projects after the United States helped overthrow the Taliban.

Hillary Clinton also traveled a lot while she was first lady. Most famously, she spoke at the United Nations Fourth World Congress on Women in Beijing in 1995 and declared that "human rights are women's rights, and women's rights are human rights." According to a 2016 National Taxpayers Union Foundation analysis, Clinton took the most trips abroad of any recent first lady: She took 47, while Bush went on 46 trips and Obama, just 22.

Melania went on her first solo international trip last fall when she took a goodwill tour through parts of Africa. Her very first journey abroad after entering the White House was to the G7 summit in Sicily in 2017, though she declined to join the president at the summit the following year, a move which some experts called "unusual," according to The Independent. And then, of course, she opted out of Trump's first summit with Kim Jong Un, which took place in Singapore last June and was the first meeting between a sitting U.S. president and North Korean leader.

International summits "are an opportunity to build and strengthen relationships with the other spouses and with the leaders as well," McBride told The Independent before last year's G7 summit. "It's always great to have the U.S. first lady and I am sure she will be missed."