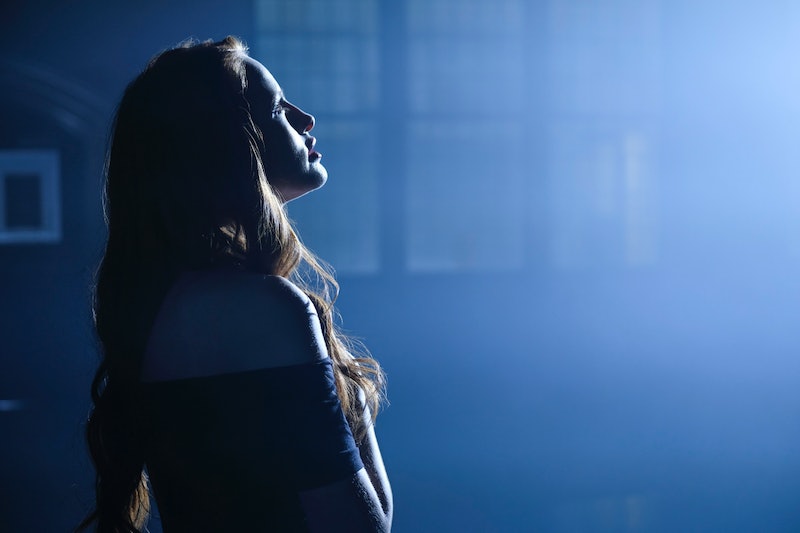 Spoilers ahead for Season 2 Episode 18 of Riverdale.

You just can't keep the Black Hood down on Riverdale. Despite The CW's addictive drama series seemingly putting that serial killer storyline to bed all the way back in the midseason finale when Archie and Betty helped unmask the Black Hood right as Sheriff Keller shot and killed him, he made a surprise appearance in this week's musical hour. It makes sense that the Black Hood would return to Riverdale: the big reveal that the Black Hood was the school janitor — a minor character who had only been introduced a few episodes prior — didn't pack the punch Riverdale fans were expecting. Many believed this was a fake-out, and the real Black Hood killer was still out there, biding his time until his next kill. And it turns out, those people were right.

In the final moments of Riverdale's musical episode, "A Night to Remember," Midge appears to have paid the ultimate price for taking center stage. After Cheryl's abusive mother refused to give her parental permission for Cheryl to participate in the school play, her understudy, Midge (Emilija Baranac) was forced to step in and play Carrie in Carrie: The Musical. Midge was ecstatic to take on the starring role, while Ethel (Shannon Purser) was fuming with jealousy. But Ethel certainly was glad she was just in the chorus when Midge was killed and her bloody body was posed onstage for the entire audience to see in the grand finale of the musical on opening night. The Black Hood is officially back, and it looks like he's already taken his first victim.

It certainly seems final, but is Midge really dead? When Bustle took a trip up to Vancouver to watch the Riverdale cast film the musical numbers for the episode, executive producer Roberto Aguirre-Sacasa was tight-lipped, saying only that the apparent tragedy has affected everyone.

"All of our characters are going to be changed after this episode," Aguirre-Sacasa says. "Rivalries have turned back to friendship. And the end of this episode happens with everyone there to witness it; something as traumatizing as that changes everyone in a way."

The trauma of Midge's apparent death also brings new questions about the Black Hood. Why is he back? "We know the Black Hood is back but that's all we know," Aguirre-Sacasa says coyly. "The characters are now all going to be wrestling with, 'Is the Black Hood back? How can the Black Hood be back? I thought the Black Hood died, what is this, is this a copycat?' There are a million questions coming out of this episode, which we'll have to answer in the last four episodes."

That's why the Black Hood storyline was put to bed immediately in the midseason finale, so they could get back to what made Riverdale so addictive in Season 1. But that didn't mean they were done with the Black Hood for good.

"It always was something we left unresolved so we could pick it back up," Aguirre-Sacasa says. "We loved the idea of having an episode about the quintessential high school musical, which everyone has done, because that was the perfect time to bring back the Black Hood."

Because there are now only four episodes left in this season, the Black Hood storyline is going to be the catalyst of what propels everyone forward towards the Season 2 finale.

"It feels like all these different plots and subplots and themes have been building — the civil war, the mafia stuff, the Serpents vs. Ghoulies, who's going to be Mayor and Student Council President — and looming over that is the shadow of the Black Hood," Aguirre-Sacasa says. "The difference between the last four episodes and the first nine episodes is now everyone is all churned up because of these subplots and there are all these other enemies out there like Penny Peabody [Brit Morgan] and Nick St. Clair [Graham Phillips]. All of these elements come together with the added terror of the Black Hood as well as all our usual relationship drama." In classic Riverdale fashion, things are only going to get crazier as the season progresses.