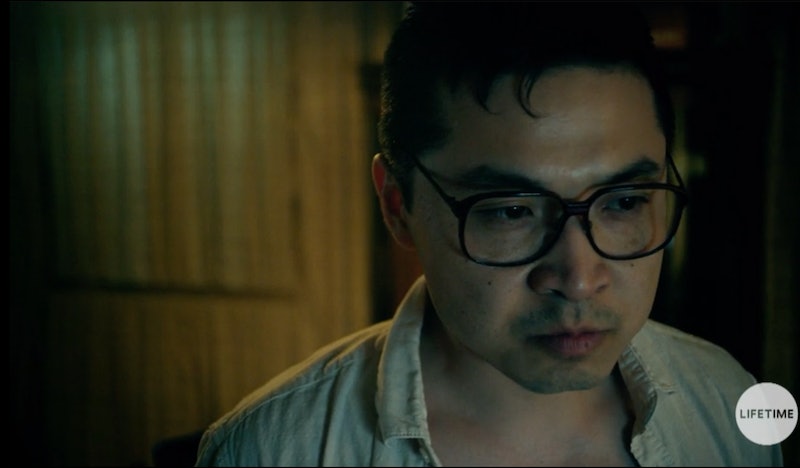 Lifetime's new movie, Abducted: The Mary Stauffer Story, is based on the true story of a missionary and her daughter who were kidnapped, chained together, and held captive by a man named Ming Sen Shiue in 1980. After they escaped, he was arrested and eventually sent to prison. Decades later, Ming Sen Shieue is still in prison for the kidnapping and for a murder related to the case.

As reported by CBS, Shiue was sentenced to 30 years to life for the kidnapping of Mary Stauffer and her then-8-year-old-daughter, Beth, as well as 40 years for the murder of Jason Wilkman, a 6-year-old boy who witnessed part of the abduction after Shiue pulled over in a wooded area and opened the trunk of his car, where he'd tied up Mary and Beth. According to the Pioneer Press, Shiue — who had been a student of Mary's when she taught ninth grade algebra and had stalked her for 15 years — held her and Beth captive at his family's home in Roseville, Minnesota, where he raped Mary repeatedly and videotaped some of the attacks. After 53 days, Mary and Beth were able to escape, and Shiue was arrested.

In July 2010, Shiue became eligible for parole. A trial was held in April to determine if he would be released from prison, which Mary and Beth attended. "Hearing the restrictions that would be put on him if he ever was paroled, hearing what it would take for him to actually be paroled, and the treatment he would have before he's allowed to be paroled, I'm much less concerned today than I was 10 days ago. I know they won't just open the prison gates and let him out," Mary told Minnesota Public Radio News at the time.

According to another Pioneer Press report, Shiue's court-appointed attorney argued that he was sorry for his actions and willing to seek treatment. Shiue also apologized to the Stauffer and Wilkman families during his testimony. " I assure [Mary] my unnatural obsession no longer exists … I will never bother her again. I give my solemn pledge that I will never hurt my victims in any way," he said.

However, Paul Reitman, a psychologist who'd examined Shiue in 2008, concluded that Shiue was "highly likely to reoffend and should be committed as a sexually dangerous person and sexual psychopathic personality," per the Pioneer Press. He also testified that Shiue suffered from paraphilia, or abnormal sexual behavior, as well as erotomania, a disorder in which a person becomes convinced another person is love with him or her.

Ultimately, a judge denied Shiue's parole and ruled he would remain in prison for the rest of his life, People reported. Shiue appealed his case in 2014, but was again denied, per the Star Tribune.

According to the Federal Bureau of Prisons, Shiue, who is now 68, is currently detained at the United States Penitentiary, Marion in Marion, Illinois. Abducted: The Mary Stauffer Story premieres on Lifetime Oct. 5 at 8 p.m. ET.

More like this
Paul Mescal, Man Of Mystery
By Samantha Leach and Heather Hazzan
What’s New On Netflix: Ana De Armas’ 'Blonde' & A Nick Kroll Special
By Arya Roshanian
'Peaky Blinders' Creator Shares Exciting Update On The Upcoming Film
By Sam Ramsden
Here’s Everything Coming To & Leaving Netflix In October
By Jake Viswanath
Get Even More From Bustle — Sign Up For The Newsletter