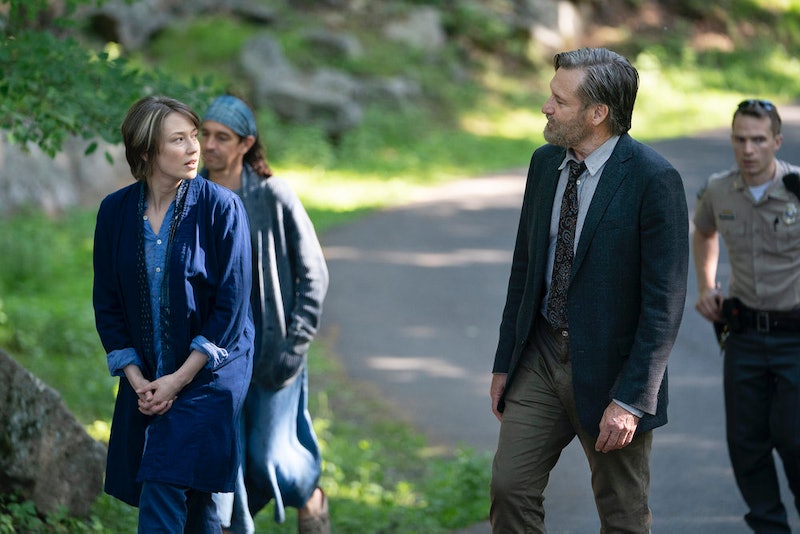 There are so many crime dramas on television right now it can be hard to distinguish them from one another. But USA's The Sinner has flipped the typical "whodunnit" format on its head, and instead opts to investigate another aspect of the case. The audience knows from the beginning who has committed the crime, but the show works to slowly reveal the reasons why a seemingly regular person would commit a heinous act of violence. And on Season 2 of the show, which features a young boy who has poisoned two people assumed to be his parents, the reason for his actions seems to lurk somewhere in his experience with the Mosswood Grove community. But is Mosswood Grove a real cult?

Mosswood Grove first began to reveal itself in fragmented flashbacks in the first episode of the season, in which Julian, the boy responsible for killing two adults with poison tea, remembered drawing on the ground while a rhythmic ticking noise played in the background. A woman sat near him, asked him questions, and urged him to embrace "Shadow Julian" rather than try to expel him. It doesn't take a detective to surmise that this woman, and this place, must have played a key role in Julian's turn. Sure enough, at the end of the first episode, the woman from the memories (her name is Vera, and she's played by the magnificent Carrie Coon) appeared on the scene, claiming to be Julian's mother.

As the show continues, it's revealed that Vera is the head of the Mosswood Grove community, initially described as a kind of utopian, alternative lifestyle community located a little outside the town of Keller, New York, where the investigation into Julian's crimes is taking place. But it quickly becomes clear that in this case, utopian is not synonymous with "nice". Detective Harry Ambrose (who also featured in Season 1) and Heather, a local Keller detective, visit Mosswood Grove, and find the people there less than welcoming. "When Harry and Heather make an investigative visit to the community, the residents seem hostile toward visitors, and give off all the signs of being members of a cult," The Oregonian writes of this moment. While it's not easy to discern what the purpose of Mosswood Grove really is, the detectives begin to suspect that the group might be hiding some unsavory secrets.

Mosswood Grove is a fictional invention — it does not appear that there is no such group actually operating under that name in upstate New York. But that doesn't mean the writers didn't draw inspiration from real life cults in order to create Mosswood Grove. From the Branch Davidians to the People's Temple to the Manson Family, there are no shortage of radical groups that allegedly drove their members to violence that the showrunners could have used for inspiration.

It's very likely that Julian's prior involvement in the Mosswood Grove community could have been the reason behind his decision to kill. When detectives entered the crime scene, they noticed the bodies had been placed in a strange position, wrapped in white cloth and with rocks placed over their eyes. Why would a 13-year-old kid not only murder his parents, but stage the bodies in a such a ritualistic manner? It seems likely that Mosswood Grove, and the mysterious Vera, were somehow behind Julian's trauma, and his crime.

On The Sinner, all will eventually be revealed, despite Vera's best efforts.