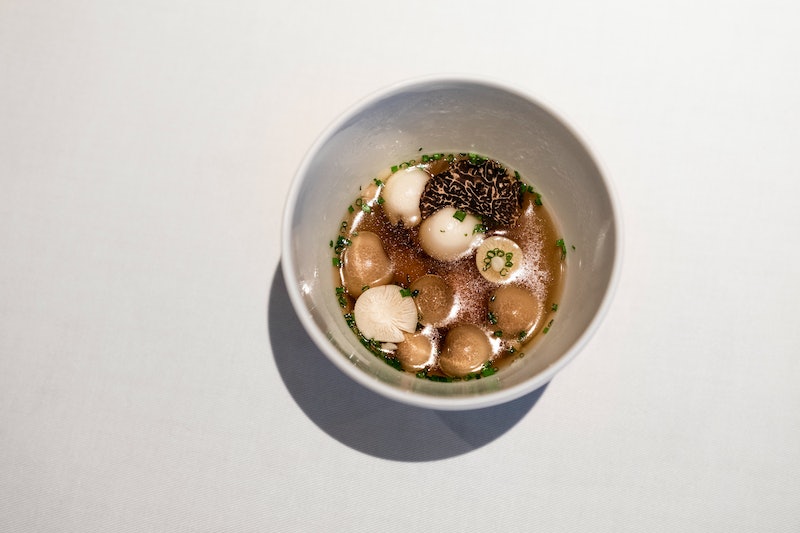 For decades, people have been told that foods containing monosodium glutamate, or MSG, are bad for you. This thinking, which has long been proven to be based in faulty science, is even the origin of the term "Chinese restaurant syndrome," a supposed (and debunked) reaction to eating food flavored with MSG. Activists are now pushing to redefine "Chinese restaurant syndrome" and change the way the West thinks about MSG — because no, MSG isn't actually bad for you.

The term “Chinese restaurant syndrome" was added to the Merriam-Webster dictionary in 1968, describing symptoms affecting “susceptible persons eating food and especially Chinese food heavily seasoned with monosodium glutamate,” according to the BBC. There are many problems with this definition, according to campaigners including the MSG producer Ajinomoto, chef Eddie Huang, and actor Jeannie Ma, including the fact that MSG isn't just found in Chinese food — and that there's very little evidence that it causes any damage to human health at all.

"Despite being a food element that's consistently at the end of xenophobic fear, there's nothing harmful about MSG," chef and registered dietitian Tessa Nguyen tells Bustle. "MSG is naturally occurring in many foods, such as cheese, mushrooms, and tomatoes. It's the thing that gives food its umami, savory flavor." MSG isn't a mysterious additive; it's just sodium and the amino acid glutamate, which is found widely in nature. Studies do show that a very small subset of the population do react negatively to glutamate, but that's rare.

"Extensive human research has supported MSG’s safety in everyday use," Dr. Billy Goldberg M.D., a doctor participating in the campaign to redefine Chinese restaurant syndrome, tells Bustle. "Organizations such as the FDA, The Council on Scientific Affairs of the American Medical Association, and the World Health Organization have all stated that MSG is safe. And in studies with individuals with self-proclaimed sensitivities, scientists have not been able to consistently trigger reactions."

Even if you believe you're sensitive to it, you'd have to eat a lot of MSG to trigger any reaction, Abbey Sharp, a registered dietitian, tells Bustle, "We know that for some individuals, MSG may cause mild transient symptoms like a headache, flushing, drowsiness, numbness, and heart palpitations, but this has only been observed at very high doses — 3 grams at once without any food." That's the equivalent of drinking over a cup of soy sauce or eating nine ounces of Parmesan in one sitting, without any other food.

"All evidence shows that the amount of MSG that we consume through food doesn’t elicit negative effects," Dr. Goldberg says. There's also evidence of a "no-cebo" effect, Sharp says, in which people who aren't told they're consuming MSG don't display any symptoms.

The myth that MSG is bad for you comes from poorly conducted science. The original idea of "Chinese restaurant syndrome" emerged from several letters published in The New England Journal of Medicine in the 1960s, where people noted they felt strange symptoms after eating Chinese food. The BBC reports that 19 different studies couldn't replicate any of those findings about MSG, except on a very small subset of the population — who would feel bad whether they were eating Chinese food or cheese and tomato pasta.

The easy acceptance of the idea that MSG was poisonous, experts tell Bustle, was rooted in xenophobia, because MSG was heavily associated with ethnic cuisines. "It was never considered if the symptoms were caused by large amounts of food, other foods eaten in combination with the meal, or other factors. It was just easy to blame it on cultural cuisine, despite it being a very prejudiced finding," Nguyen says. She notes that it's part of a wider misconception that ethnic foods are "dirty" and "unhealthy." Sharp agrees. "The longevity of the myths about MSG are, at the root, steeped in some deep-seeded societal racism and othering," she says.

MSG doesn't deserve the negative hype — and neither do Chinese restaurants. Merriam-Webster told The New York Times that they were planning to redefine the term "Chinese restaurant syndrome," but it may take more than that to erase decades of misinformation about MSG. "Fear is a very powerful emotion and a scary story often gets more mileage than a simple one," Dr. Goldberg tells Bustle. "MSG became one of those villains."

More like this
Plan C Vs. Plan B: What's The Difference?
By Lexi Inks
How 5 People Upended Their Lives To Fight For Abortion Rights
By Hannah Smothers
How To Get Energy Before A Workout, According To Experts
By Carolyn Steber
The Benefits Of Omega-3 Supplements, According To Experts
By Carolyn Steber
Get Even More From Bustle — Sign Up For The Newsletter