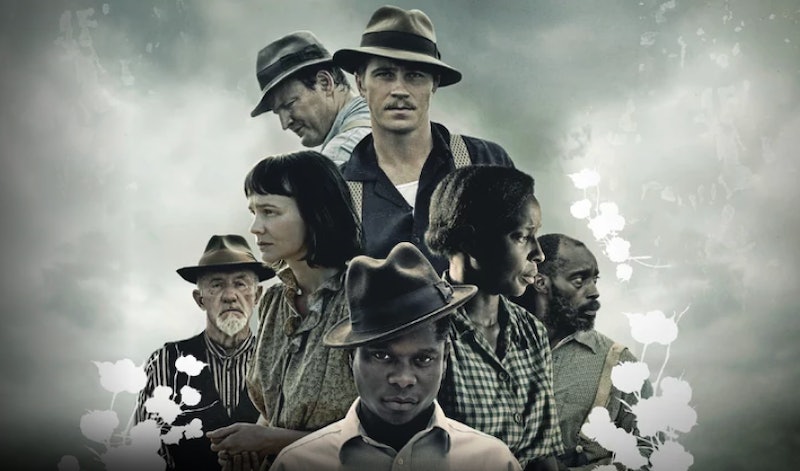 Netflix continues their quest toward winning a Best Picture Oscar, as their newest prestige film may be their most impressive yet. Mudbound is a period drama taking place in rural 1940s Mississippi that tells the story of a black family and a white family, both farmers, who are dealing with life after World War II. Issues like PTSD, racism, and economic concerns drive the plot, giving a tremendously realistic and authentic feel to the film. But is Mudbound a true story, or is it a work of fiction that's simply made to feel authentic?

It's the latter. The movie is based upon the novel of the same name by author Hillary Jordan, her debut work, which was first published in 2008. Jordan's book was highly-acclaimed, and won the Bellwether Prize for fiction. But even though the book is most definitely a fictional story, it still had some real life influences. Jordan's initial inspiration for the book came in the form of stories from her mother and grandmother about an old rural farm on which they had spent a year, and the novel was initially going to be told exclusively from the perspective of the character Laura, whom Jordan based upon her grandmother, according to NPR.

"I started out writing what I thought was going to be a short story in the voice of Laura," Jordan told NPR's Morning Edition in 2008. "And as the story grew, I just found myself wanting to hear from other people. As the story got larger, as it embraced these other themes, these larger themes about war and about Jim Crow, I wanted to hear from those people." As for those portions of the story, the war and the black experience (Jordan is white), the author conducted extensive research, reading about the experiences of black troops during World War II and an autobiography about a black southern farmer.

"I read a lot of first person accounts by the guys in that unit, and the way they spoke when they liberated Dachau (a Nazi concentration camp). It was very moving to me because, of course, these were black troops and they had experienced discrimination at home, and here they were at Dachau seeing another face of this ugliness," Jordan told The Read on WNC's Rob Neufeld. "There’s a book that I relied on a lot, called All God’s Dangers: The Life of Nate Shaw. [Shaw] was an Alabama farmer who started out dirt poor in a sharecropping family; and he grew up to have his own land ... And this journalist, Theodore Rosengarten, went to Alabama and listened to his life story. So, it’s Nate talking. That helped me so much in getting the voice right, and a lot of the farming details, and the way he’d talk about things. You know, expressions like, 'Might as well ‘d been singin’ songs to a dead hawg.' That was Nate."

When it comes to the film, writer/director Dee Rees put her own personal spin on the story by relying on separate resources. Rees drew inspiration from her grandmother Earnestine Smith's journal to fill out the film and add authenticity. The extensively kept journal included photos and detailed writings from the relevant time period, specifically influencing scenes and plot points of Rees' final film that weren't in the book on more than one occasion, according to the Los Angeles Times.

"My grandmother ... told me how she and her brother, Clarence, used to ride on the back of her mother’s cotton sack. That’s why there’s a scene like that in the movie," Rees told the L.A. Times, later adding, "My grandmother said, ‘I will never be a citizen in this country.' And what she meant by that was that this country will never see her as a first class American citizen. She’d always be a problem, or a reminder. I wanted to explore how these black soldiers are received [abroad] first as Americans then as black men. But here, they’re received only as black men, and I don’t know if they're ever seen as American."

Mudbound may technically be a fictional story, but it was shaped by accounts of people who had experienced similar events and lifestyles firsthand, which explains why it feels so real.