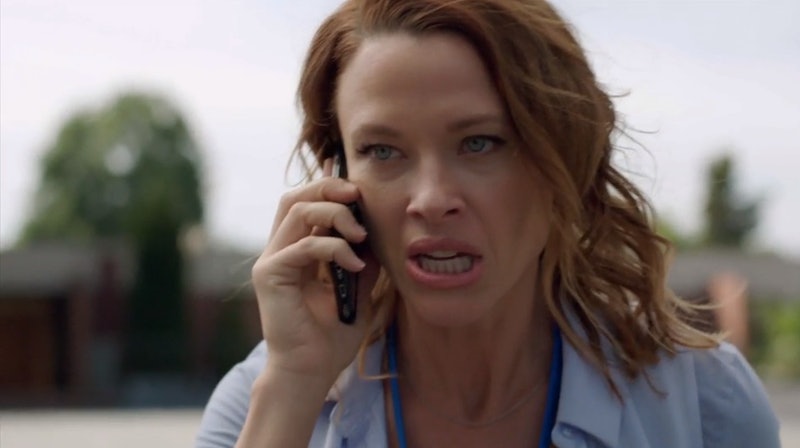 The holidays are officially over, so Lifetime has fully returned to their regularly scheduled programming. The network's latest flick, My Daughter's Ransom, isn't based on a true story. But it does include all the drama and intense moments that fans adore in a plot that's absolutely a parent's worst nightmare.

According to Lifetime's synopsis, Scottie Thompson portrays Rachel, a typical mom accompanying her daughter on a school field trip. Rachel’s greatest fears are realized when her daughter is suddenly pulled into a van by a strange man. She gets a phone call from the kidnapper who instructs her to do whatever he says to prevent him from killing her daughter. Rachel is then led into a dark, disturbing world where this stranger has complete control over her every move.

The My Daughter's Ransom trailer makes sure the viewer knows Rachel’s daughter is named Lindsey because, well, she says it five times in the first ten seconds. We get it, girl. Rachel demands that the kidnapper lets her daughter go, but he says will get deadly if she doesn’t comply with his demands. For some reason, he makes Rachel wear a black knit hat and she’s later seen engaging in a fight inside of a warehouse with several unknown people.

Interestingly, the kidnapper's face is not revealed and there's little insight into his motivations. At the end, Rachel knocks out a man in a suit and picks up the knife that she will surely use to kill the kidnapper.

Of course, the trailer can't reveal every single detail, but it does leave a ton of questions that need answers. Where are the other children and people on this field trip? Rachel appears to be at some type of zoo, but she's the only person that is in view. Surely there should be other visitors or teachers accompanying the class, right? It's possible that Lindsey wandered off into a remote section of the park, but it still seems strange.

Furthermore, how did the kidnapper get Rachel's phone number? Is this person someone she already knows or is it a stranger who has been gathering info about her life? What's up with that hat? And what is the purpose of this kidnapping? He's obviously using Lindsey as a bargaining chip to force Rachel into working for him, but there hasn't been any mention of money despite the movie's title. Maybe he's just a sick person who wants to torture this poor mommy... or there's a bigger reason why he targeted Rachel and Lindsey.

One thing is for sure: This kidnapper is underestimating the wrath of an angry mom and he will totally die by the end of this movie. After all, it’s not really a Lifetime drama if there isn’t some death involved, right? The only way to get answers to all of these questions and find out how Rachel gets her daughter back is to tune into My Daughter's Ransom when it premieres Jan. 3 at 8 p.m. ET on Lifetime.