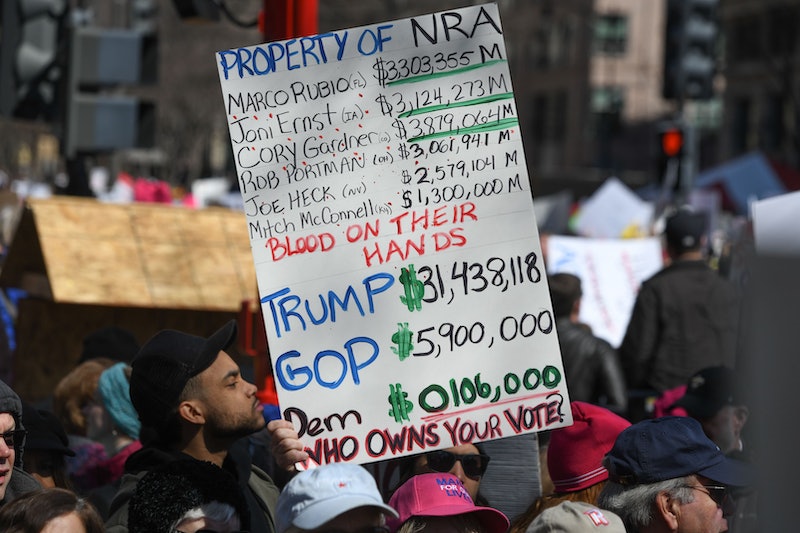 A series of deadly mass shootings in August have led to advocates and some voters yet again demanding action from lawmakers to help curb gun violence. Though Sen. Mitch McConnell has signaled for the first time that he would open the floor for debate on a universal background check law, the Senate returned from recess on Sept. 4, so there's little chance legislation would pass anytime soon. Protesting and calling your senators is one of the most effective ways to make your voice heard on gun safety, and donating to gun violence prevention groups is always an option. You can also be aware of whether your money is supporting guns in ways you might not have realized.

In recent years, businesses have been increasingly aware of consumers' ethics and how they relate to issues like mass shootings. First National Bank of Omaha, Delta Air Lines, United Airlines, and a number of rental care companies cut their ties with the National Rifle Association in 2018 after the shooting at Marjory Stoneman Douglas High School in Parkland, Florida.

A lot of businesses haven't since parted ways with the NRA or gun manufacturers, though. Here, financial experts break down how your money might be supporting guns, and what you can do if you're concerned.

A February 2018 New York Times article laid out how someone who isn't a gun owner might actually "possess a gun" if they have a 401(k) through their employer or elsewhere, or an investment in index funds.

Jill Schlesinger, a CBS News business analysts and author of The Dumb Things Smart People Do With Their Money, tells Bustle that the vast majority of people use index funds, exchange-traded funds (ETFs), or managed mutual funds, especially young people who are just getting started investing or just set up a 401(k) through their employer. As a result, Schlesinger says most investors don't understand that they own a mutual fund that may actually invest in a gun manufacturer.

The Times reported that some of the world's largest asset managers, which could manage your 401(k), are among the top shareholders of three publicly traded gun and ammunition companies: Vista Outdoor (which stopped selling guns, but still sells ammunition), American Outdoor Brands, and Sturm Ruger.

Vanguard, for example, has a 9.7% stake in Vista Outdoor, 8.9% in American Outdoor Brands, and 10.2% in Sturm Ruger. According to Weapon Free Funds, a search platform that helps people find out if their money is going to weapon manufacturers, that means Vanguard has about $15 billion invested in gun manufacturers and gun retailers for civilians (that number doesn't include how much Vanguard has invested in military weaponry).

Capital Group, one of the largest mutual fund companies, manages American Funds' Smallcap World Fund, which recently became the largest single investor in American Outdoor Brands, formerly known as Smith & Wesson, according to CBS News. Fidelity Investments was the top shareholder of Vista Outdoor as of February 2018, with 15% of the company, The Times reported.

According to Schlesinger, if you have investments that are managed by one of these companies and you want to find out what your fund is invested in, all you have to do is go to that company's website. "You click on the fund itself, and it will, every quarter, give you a list of every single holding that's within that mutual fund," she says.

Some companies, including the world's largest asset manager, BlackRock, offer gun-free investment strategies and ETFs (BlackRock does have a 14.88% stake in Sturm Ruger and a 7.52% stake in American Outdoor Brands, though it doesn't hold any of that stake in its actively-managed funds, where stocks are selected based on guidelines a client agrees to). Vanguard also offers an Environmental, Social, and Governance (ESG) fund, or a fund that makes decisions based on the sustainability and ethical impact of an investment.

Schlesinger says investors can incrementally move money into a socially responsible fund. But she says that strategy, called dollar cost averaging, makes her nervous because many people who begin the process "often abandon it when markets move against them."

"This can lead to trying to time the market, which can be dangerous," she says, adding that some people also might not have ESG funds available through the company they use to manage their investments.

Schlesinger says that when she worked as a financial planner, she advised clients who were upset that some of their investments might be going to tobacco companies to donate some of their money.

"Maybe the best idea is to essentially say, I am going to give away a certain portion of my money to these causes, because that's actually a more effective way for me to take action," she says. "It's really hard. These are tough issues."

In April, the advocacy group Guns Down America released "Is Your Bank Loaded?," which used public records to give 15 banks report cards with letter grades related to how much they do business with gun manufacturers, as well as their ties to pro-gun politicians and the NRA. Six banks — Chase, Wells Fargo, PNC, TD Bank, U.S. Bank, and BB&T — received failing grades.

Most of these banks have arranged loans for the gun industry over the years, according to Guns Down America. Some of them have less direct connections, like contributing to politicians supported by the NRA. Bustle reached out to the six banks that received failing grades for comment; three responded.

“U.S. Bank is focused on creating an environment where employees, customers and communities feel safe," U.S. Bank said in an emailed statement. "As a financial institution our role is to ensure that we are upholding all federal, state and local laws as they relate to serving our customers.”

Wells Fargo, in particular, has faced ongoing criticism for its ties to gun manufacturers. It's helped gun companies secure $431 million in loans and bonds, since December 2012, just after the Sandy Hook Elementary School shooting. In October 2018, the bank also issued a $40 million line of credit to Sturm Ruger.

A Wells Fargo spokesperson told Bustle in an email that the bank's "relationship with the NRA has been declining, and the company’s lending exposure is minimal, as Wells Fargo no longer participates in the organization’s line of credit or mortgage loan commitments." The spokesperson also noted the bank plans to invest more than $10 million over the next three years in gun violence prevention research.

Schlesinger says that if you use a bank that lends to gun companies, that doesn't mean your money is directly going to them or their lobbyists. She describes it as more of "a distant relationship."

"I think you have to decide, how much am I going to try to basically manage my relationship to this industry?" Schlesinger says. She points out that, since a lot of big banks likely do business that consumers probably wouldn't like, and "if you really want to have a really clean relationship with an institution, maybe that means you have to start looking at a local credit union, a more local bank that may not be doing business with some of these industries."

3. By Shopping At Certain Stores

One of the more obvious ways your money could be supporting guns is by shopping at stores that sell them.

After the Parkland shooting, some retailers modified their gun policies. In February 2018, Dick’s Sporting Goods stopped selling assault-style rifles, like AR-15s, in response to news that the Parkland shooter had bought a shotgun at a Dick’s (the shotgun wasn't used in the shooting, and the AR-15 is not an "assault rifle," though it is often included in discussions about assault-style weapons or an assault weapons ban). Dick’s later stopped selling guns and ammunition at 125 stores.

But some chain outdoors stores still today sell military-style semi-automatic rifles, like the AR-15, which is commonly used in mass shootings. Gander Outdoors, Academy Sports + Outdoors, Bass Pro Shops, and Cabela’s all sell military-style rifles and high-capacity magazines as of March 2018, according to HuffPost. Bustle has reached out to the outdoor stores for comment.

Walmart has also faced repeated criticism over the years as one of the largest gun sellers and the largest retailer in the country. Walmart stopped selling certain rifles, like the AR-15, in 2015, and after the Parkland shooting, it raised the minimum age to purchase ammunition and firearms at its stores to 21.

Still, advocates think Walmart could do more. After the El Paso shooting, which happened at a Walmart, finance journalist and author Andrew Ross Sorkin wrote an open letter to the company's chief executive officer, Doug McMillon, arguing that McMillon could do more to help make the country safer from gun violence. Sorkin wrote that McMillon, who has "greater sway over the entire ecosystem that controls gun sales in the United States than any other individual in corporate America," could threaten gun makers to incorporate fingerprint technology to unlock guns or else stop selling their weapons, and influence financial systems that impact access to guns.

Walmart did not respond to Bustle's request for comment, but it did announce on Sept. 3 that it would reduce its gun and ammunition sales. The company plans to stop selling ammunition for handguns, as well as ammunition for short-barrel rifles that can be used for military-style rifles, according to CNBC. It will also stop selling handguns in Alaska and ask customers to not to openly carry weapons in stores located in states that allow it.

CNN reported that Walmart will continue to sell long barrel rifles and shotguns along with ammunition for those firearms. It will also allow customers to carry concealed guns into stores, as long as they have a permit.

Judy Samuelson, the founder and executive director of the Aspen Business and Society Program, which "works with business executives and scholars to align business decisions and investments with the long-term health of society," tells Bustle the key to successfully effecting change with your dollar is not just thinking about what companies or people have the power to effect change. It's about building a large movement that lasts.

"There are examples of consumer boycotts that have changed practices and policies and they're pretty legendary," Samuelson says, pointing to the Nestle infant formula boycott from the 1970s. But she says it takes a long time, sometimes a decade or more, for such movements to be effective.

"Deep change, change with real consequence, takes staying power," she says. "And, to the extent that there is a consumer connection to things that the company can actually do in a more direct and immediate sense, the more powerful it is."

More like this
The Families Of Grenfell Tower Are Still Waiting For Justice, Five Years On
By Bustle UK
How To Fight For Reproductive Rights, Based On How Much Time You Have
By Courtney Young
17 Powerful Photos From March For Our Lives Protests Across The U.S.
By Michelle Toglia
Which RHODubai Housewife Has The Biggest Net Worth?
By Hugh McIntyre
Get Even More From Bustle — Sign Up For The Newsletter