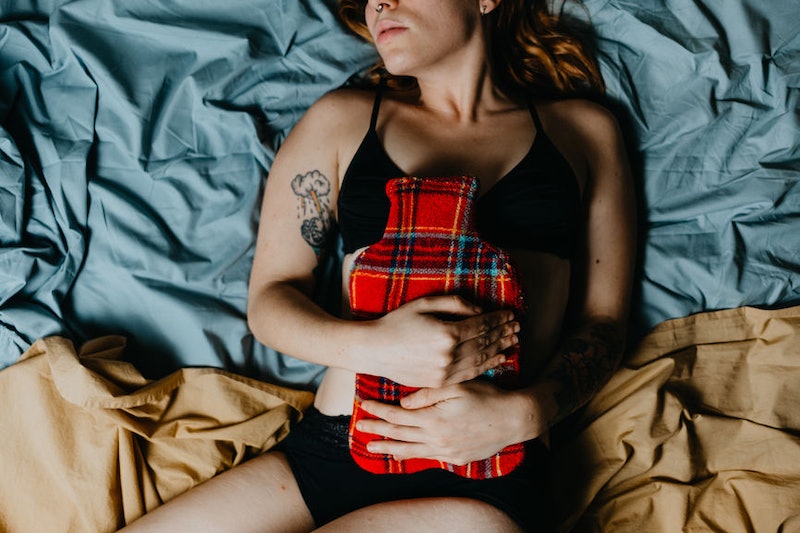 Cramps are the worst. While many have an achy, emotional, and all-round unpleasant time during their period, for some, it can be exceptionally painful. Here are the signs that your period pain is abnormal.

The NHS website states that period pains is caused by the wall of your womb contracting vigorously to allow the lining to shed away (aka to allow your period to happen). As the NHS explains:

"When the muscular wall of the womb contracts, it compresses blood vessels lining your womb. This temporarily cuts off blood supply (oxygen supply). Without oxygen the tissues in your womb release chemicals that trigger pain.”

Period pain is not as widely spoken about as other conditions, and there are many misconceptions about the level of discomfort that can be experienced by certain people during their period. However, in 2016, Professor of Reproductive Health at University College London John Guillebaud told Quartz that period pain can be "almost as bad as heart attacks."

As the NHS states, it is not known why some people experience more pain than others during their period, with their website noting that it may be related to "a build-up of prostaglandins." In addition, they write that this "means they experience stronger contractions." Prostaglandins are chemicals that "encourage the womb muscles to contract more, further increasing the level of pain," they explain.

The NHS website explains that you "may notice a change in your normal pattern of pain" if your cramps are linked to any of the above conditions. "For example, the pain may be more severe or it may last much longer than normal," they write.

The NHS also says that, along with the change in your normal pattern of pain, other symptoms that may indicate you are suffering for an underlying condition are:

The conditions described above can be very serious, so you should seek advice from your GP if you are worried about any of them. The doctor may change your contraceptive, examine your pelvis, or refer you on to a specialist to run more tests.

Going to a doctor about periods and period pain can feel intimidating and uncomfortable for some, but it is what they are there for. And remember: you know what your normal is. Periods can be painful, but they shouldn’t be debilitating. Dr Iris Orbuch summed it up well when she wrote the following in Cosmopolitan:

“Pain is so subjective that it's hard to define, but if you're skipping something you really want to go to because of cramps, that is not normal."

More like this
The Case For Following A Menstrual Cycle Workout Plan
By Emma McGowan and Carolyn Steber
Here’s Where The NHS Nurses’ Strike Currently Stands
By Sophie McEvoy
How Ovulation Affects Your Sense Of Smell, Libido, & More
By JR Thorpe and Lexi Inks
11 Surprising Ways Thongs Can Affect Your Health
By Carolyn Steber
Get The Very Best Of Bustle/UK
Sign up for Bustle UK's twice-weekly newsletter, featuring the latest must-watch TV, moving personal stories, and expert advice on the hottest viral buys.