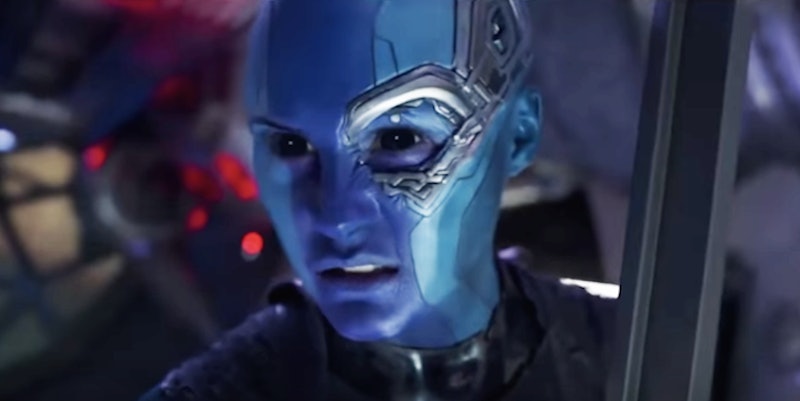 Peter Quill, aka Star-Lord, and his gang of lovable misfits are all back for Guardians of the Galaxy, Volume 2, but they seem to be getting a few new allies in the sequel. Namely, they get a helping hand from Gamora's sister Nebula to save the galaxy once again. In the original Guardians of the Galaxy, Nebula was one of Ronan's goons, but since she, like her sister, is also feuding with her father Thanos, she's willing to put their bad blood behind them — at least for the time being. But is Nebula good now after Guardians 2? That remains to be seen.

Plot spoilers ahead. Family is an important theme of the new film. While Star-Lord finally gets to meet his dad, played by Kurt Russell, Gamora and Nebula are also dealing with their fraught relationship. What we learn in the first movie is that Gamora and Nebula are at odds because of their adopted dad, who treated them more like weapons than daughters. But, in Guardians of the Galaxy 2, the sister's rivalry is explained in terms that anyone with a sibling can understand.

As it turns out, Thanos was always pitting the sisters against one another. He would have the two fight, but, in these sparring matches, Gamora always won against her cyborg sister. Nebula always felt that she wasn't as good as Gamora, and Thanos confirmed it by humiliating her and letting her know Gamora was his favorite daughter. All Nebula wanted was a sister, but what she felt she got was an adversary. During this latest adventure, though, Nebula gets to show she's not so bad after all.

Nebula and Gamora may have battled against one other in the first movie, but no one really won. She actually chose to cut off her bionic hand and plummet from Ronan's ship, rather than join the guardians in saving the galaxy or reconciling with Gamora. In an interview with USA Today, Karen Gillan, who plays Nebula, explained that her character had been "raised to be a killing machine and not have any empathy or emotion. However, she has these natural feelings toward her sister that she’s trying to suppress but can’t." However, this time around, Nebula lets her emotions take hold, saving Gamora in the final moments of the movie. The two even share a hug that's bound to bring a tear to your eye.

Nebula is a given a chance for redemption, but is this good guy act forever? In an interview with the BBC earlier this year, Gillan revealed that Nebula is in Avengers: Infinity War and the fourth Avengers movie. For those who've read the comics, this isn't at all surprising and her role is pretty clear. Nebula is trying to keep Thanos from completing the Infinity Gauntlet; you know, the glove with all those Infinity Stones in it, which would allow him almighty power over the galaxy.

But, as Inverse points out, Nebula isn't exactly trying to stop Thanos from the goodness of her heart. Instead, she's looking for revenge, and switching sides would certainly upset him. So would stealing his precious gauntlet, which she actually does in the comics and which she could also do in the movies.

In an interview with Screen Rant, Gillan said that Nebula "is having quite a cathartic experience with her sister in this movie and I think she is going to get to the point where maybe she’ll get to the good side, but also I kind of want to maintain a little bit about the bad." So, basically, Nebula is good for now... but maybe don't bet on it being that cut and dry forever.