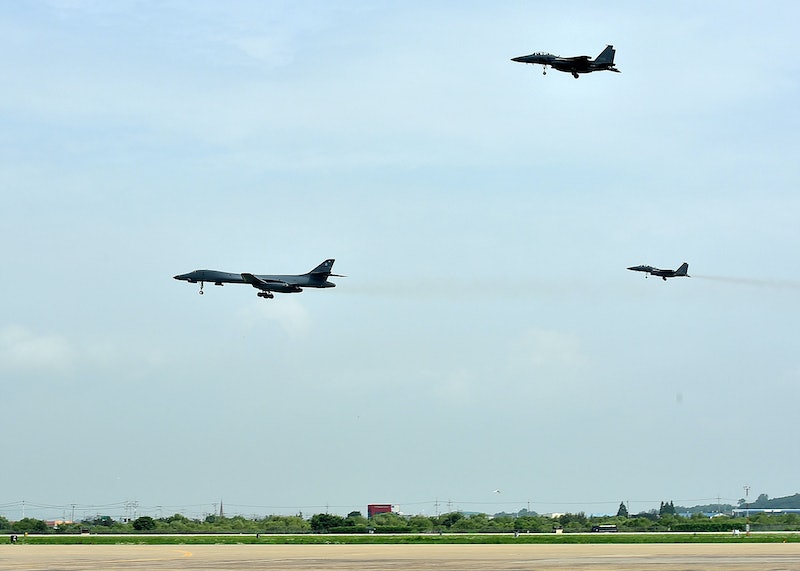 Following Trump's threat North Korea would be met with "fire and fury" if North Korea did not stop threatening the U.S., Pyongyang responded publicly that it was considering a strike on the U.S. territory Guam. Given the possible widescale implications of this interaction, many are wondering if North Korea is going to nuke the U.S.? And if so, how soon and how devastating would the bombing be?

While Tuesday's exchange between Trump and the North Korean regime caught the world's attention, the concept of nuclear war has been on the table since North Korea's test of two inter-ballistic missiles in June, and their testing of a nuclear bomb in January 2016. In response to these escalating threats of an attack, the United Nations imposed strict sanctions on North Korea following a vote on Saturday, August 5.

The sanctions would prohibit export of North Korean seafood, coal and iron and could cost the country as much as $1 billion in revenue. On top of that, the resolution limits North Korea’s Foreign Trade Bank by blocking North Korea from joining new ventures with foreign companies. The hope is that these sanctions will incentivize North Korea to cooperate with global diplomacy. Or at least, not go to war. However, it should be noted that Trump's threats to North Korea are only fanning the flames of possible war.

Right now, when posed with the possibility of North Korea nuking the U.S., there are a few key factors to consider. The first, is will the sanctions against North Korea help? The second, and perhaps more determining factor, is will the U.S. attack North Korea first?

Jean Lee, a former AP Pyongyang bureau chief told The Guardian the conflict is far more reliant on Kim Jong Un and Trump's ability to talk. "No one in the region, not even North Korea, wants another war. But Kim Jong Un is going to push it as far as he can to get what he wants: recognition from the United States that North Korea is a nuclear power, and legitimacy at home as a ruler who can defend his people against the big, bad US," said Lee.

On Thursday, Trump tweeted boasting about the U.S.' nuclear arsenal, which he said was "far stronger and more powerful than ever before." Meanwhile, Secretary of State Rex Tillerson stressed that there was no imminent threat from the isolated nation, insisting to reporters that "I have no concerns about this particular rhetoric of the past few days."

Mixed messages aside, the question of whether North Korea will nuke the U.S. rests heavily on a few factors that are in motion, perhaps the most important being restraint and diplomacy from the U.S. government.