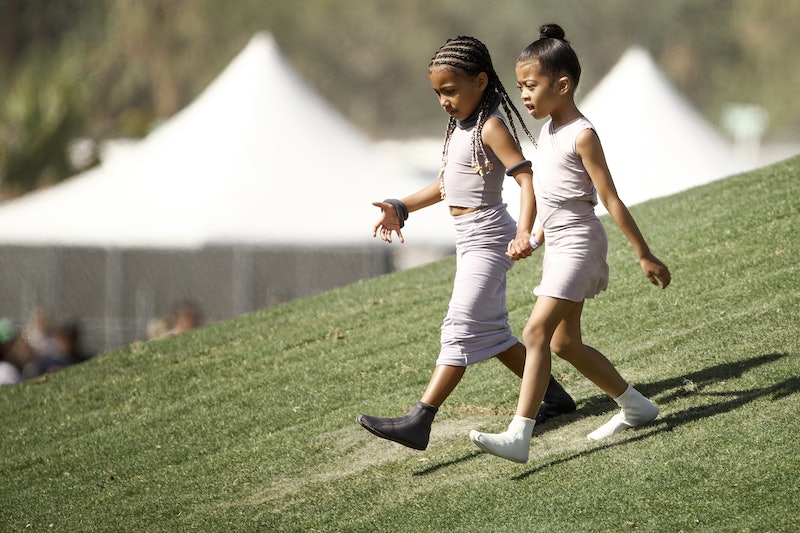 North West is cooler than all of us at just six years old. Proof: North West wore a nose ring to her great grandma's birthday party. This is the stuff that teens usually pull to shock their elders, so West is way ahead of the curve.

West debuted the new accessory over the weekend, when the Kardashian-West and Jenner family celebrated Mary Jo “MJ” Campbell's 85th birthday party. Campbell's official birthday isn't until July 26, but the family got together to celebrate a little early with a garden party shindig.

West came dressed to impress, donning a highlighter orange two-piece outfit, white wrap-around shades, and pink holographic slides. Since West's mom is Kim Kardashian, the 6-year-old knows that accessories can make or break an outfit. Which is why West decided to go hard on jewelry and wore a choker necklace, a nose ring, and face stickers.

The nose ring in question was a hoop ring, and Kardashian assured fans that it wasn't a real piercing. "Fake nose ring alert!!" Kardashian captioned her Instagram Stories photo of her daughter posing with her family. West posed next to aunts Khloé and Kourtney Kardashian and cousins Penelope Disick and True Thomspon.

The next two photos that Kardashian posted were mother-daughter snapshots of the pair making kiss faces. Since West angled her head to the side, you could better see the small hoop accessorizing her nose.

While the nose ring is a bold fashion move for a 6-year-old, West's choker necklace is also noteworthy. The choker spells out West's name and is comprised out of two rows of chains. It looks like the necklace could be made out of diamonds, but it could also simply be rhinestones.

The interesting thing about the necklace is that Kardashian has the same one, but with Saint West's name. Kardashian was first spotted wearing the necklace in March 2016, four months after Saint was born. She wore the piece while out to lunch with her sister, Kourtney, in Calabasas, California. The necklace in question was a diamond encrusted choker that was comprised of two diamond chains and the word "Saint" spelled between them. It looked identical to North's necklace.

A month before Saint was born, Kardashian shared on her website that she hoped that West would surprise her with a "push present" after the birth of their son.

“I like the idea of a push present — after nine months of pregnancy it’s a sweet and well-deserved thank you,” Kardashian wrote in November 2016. “We women go through an entire pregnancy carrying a baby … of course it only makes sense that we get something amazing to show how amazing we are! LOL!”

Her request was a diamond choker. “This pregnancy, I would love a Lorraine Schwartz diamond choker, like the ones I've worn before to the Art + Film Gala," Kardashian said.

North's choker looks just like her mom's, though it might not feature real diamonds or gemstones. From nose ring to personalized accessories, North was one of the best dressed at the party.

More like this
TikTok Is Raving About Primark’s Affordable North Face “Dupe"
By Sam Ramsden
Harry Styles Has Become An Accidental Vinted Model
By El Hunt
Hailey Bieber Went Pantsless In A Hoodie By Justin's Brand Drew House
By Dominique Norman
Aerie’s Curve-Hugging Offline Leggings Will Give You A BBL In Seconds
By Bella Gerard
Get Even More From Bustle — Sign Up For The Newsletter
From hair trends to relationship advice, our daily newsletter has everything you need to sound like a person who’s on TikTok, even if you aren’t.