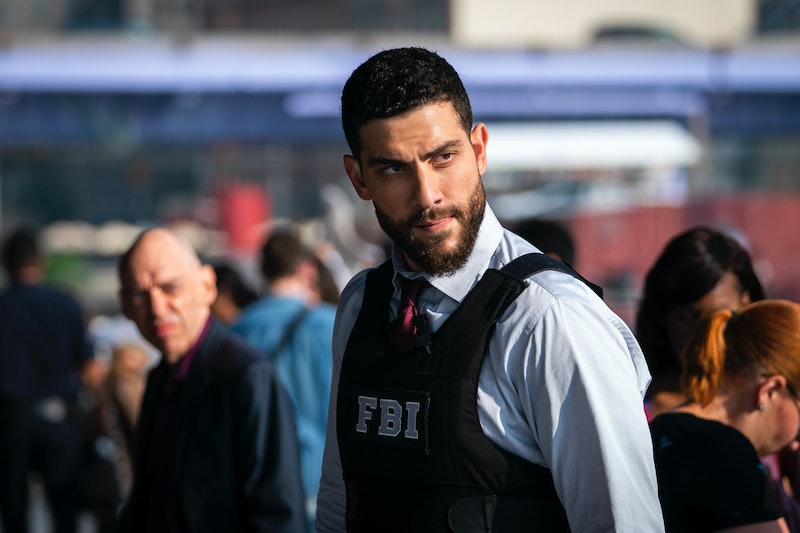 For just about as long as it has existed, the Federal Bureau of Investigation has provided ample material decades of crime thrillers and political dramas. Now, another TV show is joining the legacy of FBI fiction: the succinctly titled, FBI. The series premieres on Tuesday, Sep. 25 at 9 p.m. E.T. on CBS, and follows the work of two federal agents, Maggie Bell (played by Missy Peregrym) and Omar Adon Zidan aka OA (played by Zeeko Zaki). As usually happens with shows that are loosely based in reality, you might find yourself wondering, is Omar Adon Zidan from FBI based on a real person?

According to the casting announcement in Deadline, OA's character made it from Bushwick to West Point "and has both the confidence – and the will – of someone who’s had to fight every step of the way. After spending two years undercover, the DEA abruptly ripped him out, and he was cherry-picked by the FBI." The first-look trailer portrays him as more of the rule breaker to Maggie's straight man, ready to break down a door or two if it means getting closer to solving a case.

OA, like the rest of the series, is a work of pure fiction. However, also like the rest of FBI, he's meant to be realistic, if not 100 percent accurate. While the FBI doesn't tend to be really forthcoming about the profiles of their current agents, it's highly believable that a former undercover DEA agent like OA would be hired as an FBI agent today.

According to the official FBI education website, "Critical Skills" such as having previous experience in other government intelligence agencies can put candidates at an advantage during the hiring process. So it's pretty believable a transfer like the one OA undergoes before the pilot could happen in real life, too.

In an interview with Sioux City Journal, Zaki, who immigrated to the US from Egypt as a baby, explained that the role of OA was originally written as Latino. "I got the audition and didn’t know if they thought I was Latino," he said. "Then Dick started asking me about Egypt and how this could change things for me."

Sioux City Journal also explained that the original character had been linked to drug cartels, but that the writers altered the character specifically for Zaki. "I got the new script and, boom! The first line was in Arabic and the second was a joke. I took a step back and realized, 'Take this chance. It’s time.'"

In July, CBS released a 1-minute behind-the-scenes clip titled "See How The Intensity Of FBI Honors The Sacrifice Of Real Agents." In it, Zaki tells the camera that the FBI headquarters in New York City (where the show is set) is the biggest on in the nation. Peregrym adds, "These people work long hours, extremely hard. They sacrifice everything." The show does certainly look intense, and so in this sense it's clear the that it's trying to do justice to the stories real men and women that Zaki and Peregrym's characters symbolize.