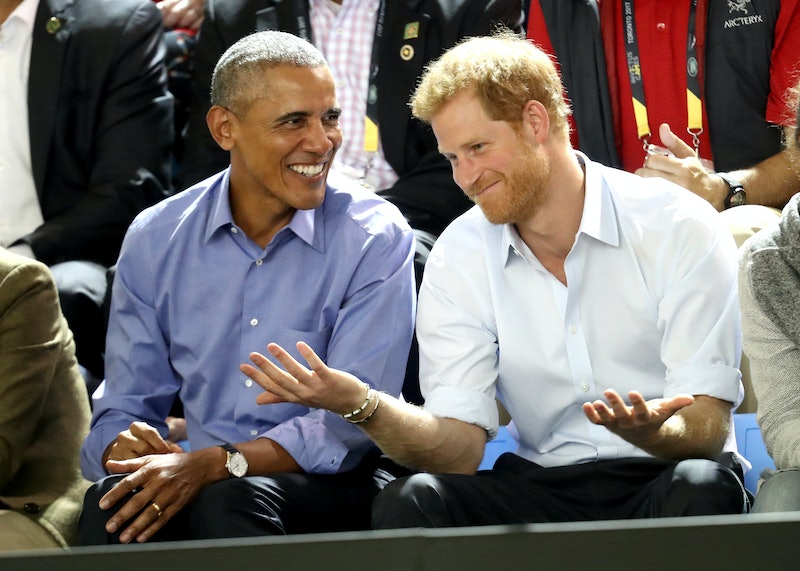 Soon after the news of Prince Harry's engagement to American actress Meghan Markle was announced, speculation on who would make the guest list began. Now, one burning question has finally received an answer: the Obamas won't get an invite to the royal wedding.

However, they likely won't view it as too much of a snub, despite Harry's friendship with both Barack and Michelle Obama. They're not alone in the ranks of internationally known figures who've been left off the guest list — in fact, Harry and Meghan won't invite any world leaders, according to a report from the Daily Mail.

There was some speculation that the Obamas would receive an invitation and the Trumps would not, but now a Kensington Palace spokesperson has made it clear that the engaged pair has sidestepped the issue completely.

"It has been decided that an official list of political leaders — both UK and international — is not required for Prince Harry and Ms. Markle's wedding," the Daily Mail reported that the spokesperson said. "Her Majesty's Government was consulted on this decision, which was taken by The Royal Household."

Price Harry is not an heir to the throne, so he's not required to have an invite list that includes the foreign and domestic political leaders who would have been invited to Prince William and Kate Middleton's wedding.

Their wedding will take place at St. George's Cathedral, which only seats 800, as opposed to Westminster Abbey, which can accommodate up to 2,000 invitees. If Harry and Meghan were required to invite the long list of foreign dignitaries required of an heir to the throne, then a good portion of the invitations would have to go out to those people rather than anyone else they might like to have present on their special day.

It wouldn't have been wholly unexpected for the Obamas to receive an invite, just as friends of the royal couple. Over numerous visits, Prince Harry became friends with the former president and his wife, and he was even with Michelle for the official kickoff event of the Obama Foundation's inaugural summit. The Obamas have also supported one of Harry's favorite causes, the Invictus Games. This has even included a now-famous commercial for the sporting event, which gives injured veterans a place to compete in all kinds of sports, where Barack and Michelle Obama issued a challenge to Harry and his grandmother, the queen.

While the members of the royal family generally don't comment on current political affairs — either at home or abroad — earlier comments from Markle made it seem unlikely from early on that Obama's successor in the Oval Office would receive an invite. In 2016, long before she was engaged to Harry, she gave an interview on The Nightly Show with Larry Wilmore in which she called Trump "divisive" and "misogynistic." She's also long been active in numerous humanitarian causes, trying to rally support for refugees and women in political office. The Trump administration, on the other hand, has not enacted policies that are beneficial to refugees, and Trump's cabinet has the fewest female members of any in three decades.

Prince Harry and Markle haven't cited a specific reason why they have chosen not to invite any world leaders — even the United Kingdom's prime minister, Theresa May, will not be invited to attend. However, one result of it is that they will not have to face the potentially sticky situation that would arise from inviting a former U.S. president but declining to invite the current president. If you, like the Obamas and the Trumps, also didn't find yourself on the invite list, you can still take part by sending a gift — except the pair has requested that instead of sending a gift to them, you send it to one of the charities that they care about.