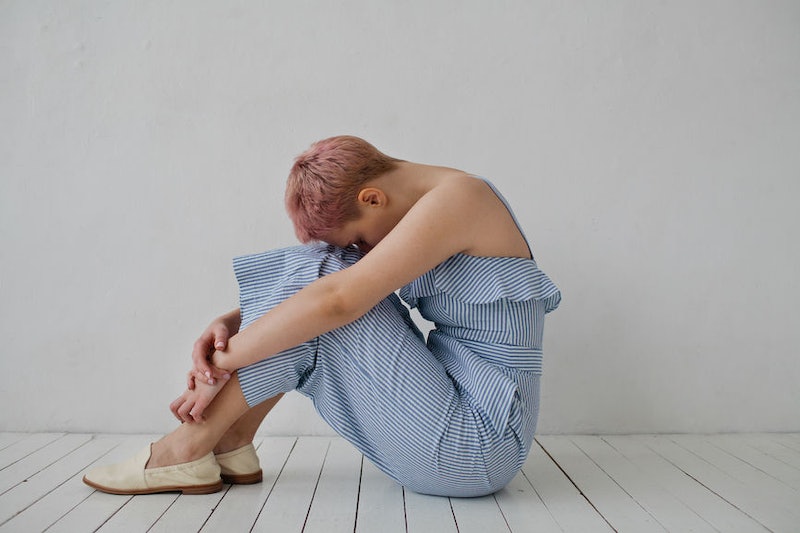 Periods are a weird one, aren't they? Some months, you won't feel any pain at all and can go about your everyday business without a care in the world. Other months, all hell breaks loose and you're doubled up in bed for a few days. Funnily enough, the cramps seem to get worse when you're feeling pressure, whether it's from work, friends, or family. But is period pain really worse when you're stressed or is it just a myth?

According to the NHS, period pain is a result of a pretty complicated process. Cramps can occur when the muscular wall of the womb tightens or contracts. When you have your period, these contractions tend to be more powerful in order for the lining of the womb to shed.

Contractions in the womb compress blood vessels lining that part of your body which results in blood and oxygen supply to the womb being cut off. A lack of oxygen means that tissues within the womb itself release pain-causing chemicals. And because your body loves you so much, it also releases more chemicals called prostaglandins which cause more contractions and more pain.

Although period pain can be caused by an underlying medical problem such as endometriosis, Women's Health Concern reports that around 80 percent of women will experience some form of period-related discomfort at some point in their lives. This pain can become severe enough to disrupt day-to-day life in around 5-10 percent of women.

Particularly painful periods are known as dysmenorrhea and science seems to suggest that stress may play a factor in the worsening of period pain. Unsurprisingly, there haven't been too many studies into the issue. (That appears to be a recurring theme when it comes to women's health topics.) But the experts that have looked into period pain have found similar results.

In 2010, a study published in the Journal of Women's Health found that stress could in fact lead to worse PMS symptoms. Women who said they felt stressed two weeks before starting their period were between two and four times more likely to report moderate to severe symptoms compared to women who reported no signs of stress.

The researchers behind the study were unable to conclude why stress may affect period pain levels. However, they had a couple of theories including that stress may alter ovarian hormones or that the stress hormone cortisol may have a direct impact on PMS.

Dr. Jamil Abdur-Rahman appears to believe it's the latter and even states that lack of sleep can also result in period pain caused by stress. He told Self, "If you don’t sleep enough, your body will release more of the stress hormone cortisol, which affects how your pituitary gland works."

"Your pituitary gland regulates hormones, so this can have a major effect on your cycle, leading to periods that don't arrive when you're expecting them to. Thanks to the imbalanced hormones, they may even be heavier or more painful than usual." Dr. Antonio Pizarro also told the magazine that elevated stress levels can affect the pituitary gland in a similar way.

It can be difficult to control how stressed you feel, but trying out a number of relaxation techniques from meditation to a daily bout of yoga may help.