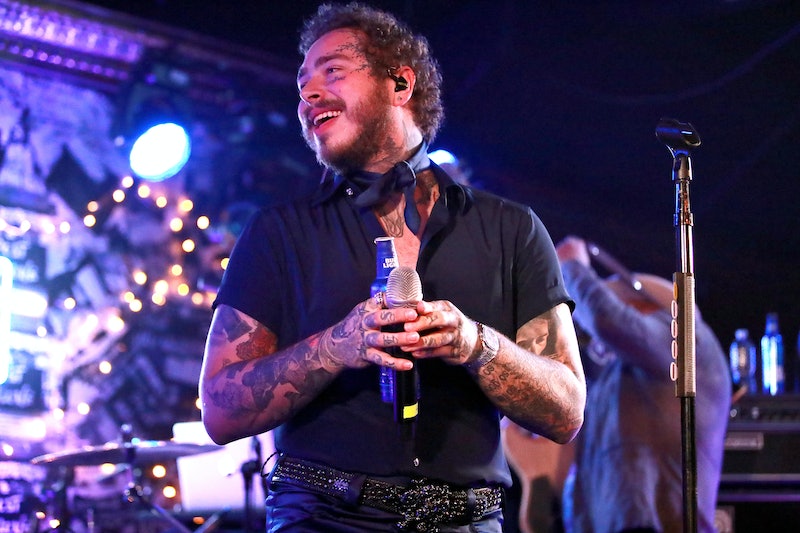 When he's not singing about how far he's come or how successful he is, many of the songs on Post Malone's discography turn to the topic of love. While he has sung about falling in and out of love various times over the course of his career, the matter of whether or not Post Malone is single or not in 2019 is an elusive question. Malone was in a long-term relationship with Ashley Diaz until October 2018 when, according to Us Weekly, the couple called it quits. While Post Malone has kept relatively quiet on the matter of if he's seeing someone, he has confirmed that he's been dating people following his breakup with Diaz.

In March of 2019, Post took to Twitter to announce "to the people trying to dig so f***ing hard to try and get me to leave my girl, y’all ain’t real fans and it needs to stop." XXL reports that the tweet, and others, were a response to a fan of Malone's finding his girlfriend's personal Instagram account, screenshotting and posting pictures from her account after she had deactivated her account, and attempting to alert others to her identity as well as try and "warn" Post that his girlfriend may be trying to take advantage of his fame and wealth.

The statement in Malone's tweet that expresses "The past is the past and it has nothing to do with anything. have some respect. who gives a f***? let us live our lives" seems to be a direct response to warning that the fan attempted to share with the world and a warning to anyone else who may try and tarnish his opinion of his romantic partner.

Since then, however, Post Malone hasn't made any public announcement about who that girlfriend is or if the two are still in a relationship. It's unclear if this woman is also the same person that paparazzi spotted Post Malone spending time with a on a yacht in August of 2018, and again at the airport a few months later. Whoever Post's latest partner is, it's clear that they're making an active attempt to keep their relationship, and even her identity, out of the spotlight — which must be incredibly difficult in 2019.

Between paparazzi, Instagram stories, and various other forms of social media interested in uncovering the love lives of the rich and the famous, the fact that the identity of someone who — assuming they're still dating — has been in Malone's life for a year has gone unrevealed is truly impressive.

Of course, the fact that no one knows who Post Malone's girlfriend really is means it's entirely possible that the two broke up and nobody knows about it. Whether he's dating someone or is living the single life is unclear, but even if there is someone in Post's life it is safe to assume at this point that he won't be letting the public know about his dating life until he's ready to tell the world.