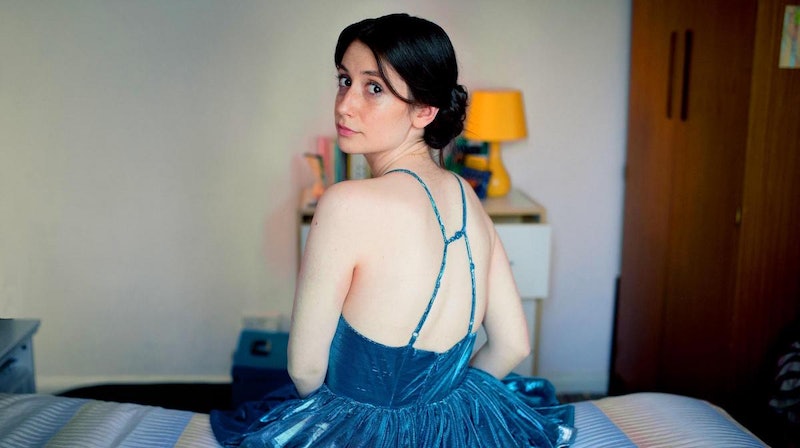 Channel 4's new drama Pure, premiering tonight, follows the story of a young woman with a specific form of obsessive compulsive disorder. Marnie has a mind plagued with extreme, intrusive thoughts, mostly of the sexual kind. But is Marnie based on a real person, and is Pure based on a true story?

The answer is yes; Marnie is a fictionalised figure based on writer and creative producer Rose (Bretécher) Cartwright, who wrote a memoir —also called Pure — detailing her own experiences with intrusive sexual thoughts, in 2015. Cartwright's particular form of OCD is sometimes called "pure O," "pure OCD," or "purely obsessional OCD," according to a piece she wrote for the Guardian back in 2013, and it is characterised by "repetitive thoughts, doubts and mental images about things such as sex, blasphemy and murder." As Cartwright explains, it is called this because "the compulsions are largely invisible, and not often acted out in the more obvious, better-known ways such as cleaning or hand washing." In her 2013 article, Cartwright wrote:

"On a spring night when I was 15 the mental image of a naked child entered my head and the corners of my world folded in."

Cartwright's memoir charts her experiences from the time when she was first gripped by early sexual impulses all the way through to her recovery, and I'm so pleased her story has been adapted for TV. Kirstie Swain, the writer of Channel 4's Pure, which was created in collaboration with Cartwright, said in an interview about the show that, when she was first handed the book, she exclaimed "f***" several times. "I felt a real connection with it," she told Channel 4.

More specifically, Swain found the book's most relatable aspect to be "the idea of spending so much much time in your own head but at the same time finding it hard to be in it." While Cartwright's condition may seem relatively unique, I think anyone who routinely suffers from anxiety will be able to relate to the aspects of it that Swain did.

On Monday, Jan. 21, the Guardian reported that she show was "set to smash taboos." While around "three quarters of a million people are living with life-affecting OCD in the UK," it's not possible to give an exact number of people living with "pure O," the Guardian states. However, the newspaper's writer, Eleanor Morgan, comments that she believes it's "high likely" that "many others are living a version of Cartwright’s — and Marnie’s — experience."

Speaking about the process of bringing her story to TV, Cartwright told Channel 4 that "there was a lot of interest from different production companies," but she "never assumed [it would] get green lit, because stuff never does." So, when she got the call saying it was going through, "that was a big deal," she said.

So, how true is the show to Cartwright's own story? Well, "Marnie’s character arc mirrors mine very closely, and for this to be an authentic show you need to protect that core authenticity," Cartwright said in her interview with Channel 4. While watching it back, Cartwright felt "a million feelings all at once," and it's likely we'll all get a dose of the feels watching it too.