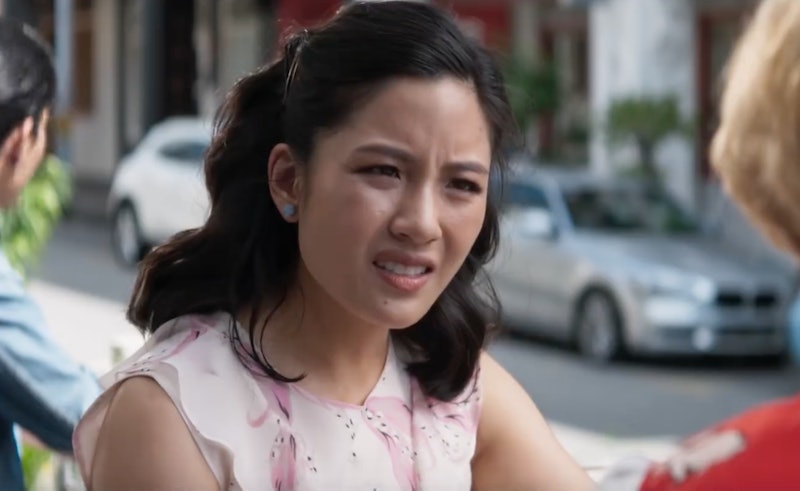 Crazy Rich Asians, out Aug. 15, is a movie filled with abundance. The number of Asian American actors in the movie is plentiful, and the plot itself depicts decadence to epic proportions. The film's leading male character, Nick Young (Henry Golding) belongs to one of the richest families in all of Asia. When he brings his girlfriend, Rachel Chu (Constance Wu), to his mansion in Singapore, a culture clash ensues. At times, the events are cringe-worthy, especially because you might be able to imagine the drama happening in real life. But that doesn't mean that Rachel Chu from Crazy Rich Asians is a real person, though, because most of the characters in the film are fictionalized to certain degrees.

While Nick's family's inordinate wealth might seem like the stuff of fairytales, it's actually based on some truth. You see, Crazy Rich Asians the movie is based on a book of the same title, written by Kevin Kwan, and Kwan's real life actually resembles Nick's in all its extravagant glory. According to Refinery29, Kwan's great-grandfather founded Singapore's oldest bank, and the entire family became extremely wealthy because of it. And like Nick, Kwan went to school overseas and landed in the U.S..

But that isn't to say that Crazy Rich Asians is completely autobiographical — it's far from it. Kwan has gone on the record in explaining how his novel's (and the subsequent book's) characters only have mere resemblances to real-life people. "I changed enough details so no one is recognizable. But their essential characteristics are there," Kwan told Refinery29. "I know all my characters — or the people who inspired them – very intimately."

As for whom inspired Rachel, the answer might surprise you, because it's not necessarily one of Kwan's real-life partners who he brought to Singapore to meet his family. Instead, Kwan told Toronto's FASHION magazine that he used himself as inspiration while writing the fish-out-of-water character. "I do relate to Rachel in many ways because I’m also an outsider in this world. Whenever I go back to Asia, I really do feel like a fish out of water. And I’m looking at the world through her eyes and saying, ‘This is ridiculous,’ the amount of money people spend, the amount of money people have. It’s sort of out of reality from the rest of the world. So in that way, I feel really close to her," Kwan said.

In the same interview, Kwan also revealed that he related almost equally to the character of Alistair Cheng. Kwan told FASHION, "He gets discounted and gets treated like the dumb cousin, which I relate to, because I am the ‘dumb’ cousin.” And while talking to R29, Kwan expanded on his connection to Alistair, saying, "Everyone’s like, ‘What does he do?’ there’s a running joke about what he actually does... I really do identify with him in many ways."

The film's star, Wu, relates to Rachel too, but for different reasons from Kwan's. In an interview with Women's Wear Daily, the Fresh Off the Boat actor said, "Rachel grew up in an environment that had... similar values [to mine]." Wu added that she understands how someone can change when thrown into a different world, and how she's currently experiencing a lot of changes in her own life. "Rachel finishes her story. I think personally, I’m in the middle of my story,” Wu told WWD.

Even if you've never dated a possible heir to an extreme fortune, you might be surprised by how relatable you find Rachel Chu in Crazy Rich Asians. If not, you'll at least wish you had her wardrobe.