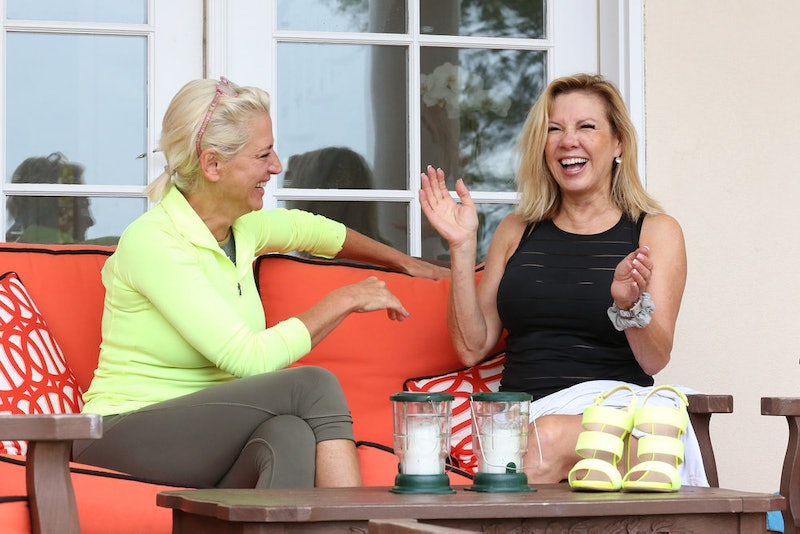 As an original member of the Real Housewives Of New York cast, Ramona Singer has seen a lot of stuff. She’s watched nearly all of her fellow Housewives get divorced, she’s gotten divorced herself, and she’s come out the other side. Ramona keeps talking about how she’s aging like a fine wine, and as grating as she can be sometimes, she's also not wrong. Ramona Singer is definitely doing her thing. But is Ramona single on Real Housewives Of New York? She always seems to be on the prowl.

Ramona seemed to move on quickly from her divorce from longtime hubby Mario Singer, and that meant that Hurricane Ramona was out on the town. Ramona has expressed on the show before that she loves to go out on dates and that she’s not looking for anything serious, which, after being married for two decades, makes perfect sense. Why get locked down? You gotta fly free, girl. And free she has. Ramona was allegedly spotted, according to Radar Online, getting some hot-and-heavy smooches in with Housewife hopper Harry Dubin at the end of 2018, but Dubin quickly told the site that he would be “honored” to date Ramona but they’re just buds.

“It was the angle of the camera looks like we were making out,” he said. “There’s thousands of pictures where someone looks like they’re doing something they’re not. I didn’t know anyone was snapping anything.” Harry and Ramona have been friends for a long time, so while I would love to poke holes in this theory, they could be — really — just friends.

If Ramona isn’t with Harry, is she back with her ex, Mario? Mario dumped Kasey Dexter, the woman with whom he cheated on Ramona, in 2018, because she allegedly cheated on him. According to Page Six, Mario set up a nanny camera to find out if Dexter was cheating on him with another man, and, according to Mario, she was. So, he kicked her out. (Karma and all that, no?) So, these ex-spouses are officially both on the market. Mario can be seen in the trailer for the Real Housewives Of New York Season 11 extravaganza, but considering that there’s no smoking gun that ties Mario and Ramona together right now (I checked!), it’s entirely possible that this divorced couple has to remain amicable for the sake of their daughter. That’s just good parenting, and it doesn’t mean that Mario and Ramona have rekindled their romance.

A trip to Instagram is perhaps the easiest way to confirm Ramona’s singledom right now — her Valentine’s Day post said that her girlfriends were her Valentines. Who needs a man when you have a great group of gals around you? Ramona seems to be spending a lot of time promoting her businesses, promoting Real Housewives Of New York, and seeing her friends, so she might not have time for anything serious. For now, that seems to be the way Ramona likes it — staying fun, flirty, and ready for whatever is next.