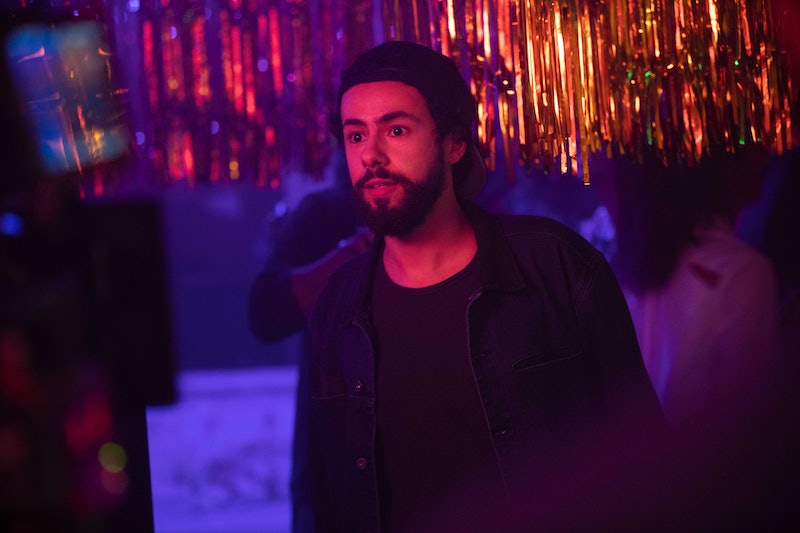 Hulu's new comedy, Ramy, stars comedian Ramy Youssef as a first-generation Egyptian-American trying to discern where he fits between two vastly different cultures. Youssef, who co-created and co-wrote the show alongside Ari Katcher and Ryan Welch, shares more than a name with his character — they're both Muslim-Americans who grew up in New Jersey. But while he did draw on some of his personal experiences, Ramy isn't exactly based on a true story.

The series is semi-autobiographical in the same vein as FX's Better Things or Hulu's other recent comedy hit, Shrill, which was based on a memoir by Lindy West. As Youssef tells Bustle, there are plenty of similarities between him and Ramy's protagonist, but with a few pointed changes.

"I've been doing comedy and creating things and making things since I was like 17, so I've always had a creative outlet and this character doesn't," Youssef explains. "So this is very much like an alternate reality version of myself where I kind of tried to imagine, where would I be if I was sitting with all my problems? And if I had a family that was a little less communicative than my own, how would that look?"

For Ramy, the character, that means he's a little more lost than has IRL counterpart. "This character is a lot more stuck than I am, and he's a little less aware than I think I might be in real life," Youssef continues. "I would say the show's very emotionally true but the events and, you know, the specifics of the characters are definitely not my real life. Like, my family could watch the show, and feel okay, in terms of — it's not like, 'Oh, Ramy made a show about us.'"

In fact, the Hulu series depicts the protagonist's family in a sometimes unflattering — but bracingly honest — light. "They're messy, they're ignorant, they're loving, they're a little racist...they're everything everyone in America is," Youssef told Vanity Fair. One such family member is Ramy's anti-Semitic uncle, which is a complicated yet realistic depiction of that one racist uncle (or aunt or grandparent or something of the sort) that every family seems to have.

"Our uncle is a Jewish conspiracy theorist. Your uncle is a Muslim conspiracy theorist. His uncle hates everybody and was probably in the K.K.K.," Youssef told VF. "Everyone's got that guy. He lingers. I liked looking at the reasons why he lingers." Furthermore, the series will switch perspectives later in Season 1 to show Ramy's mom and sister's point of views, according to Variety, but the majority of the series will be seen through the protagonist's eyes.

And since the Hulu series depicts a Muslim family, Ramy often deals with religion in an unapologetic, irreverent way. "A lot of our art is us apologizing or showing we're not terrorists," Youssef told Variety, referring to Muslim people in the entertainment industry. "If that's what you're looking for, you're not getting that [here]. I think what's happening in a lot of television is that there's a sense of social justice and you watch a show that's [about] how the world should be [but] I don't think my show is how the world should be; it's how it is."

So while Ramy isn't an exact depiction of Youssef's own life, it is an honest portrayal of his experiences.