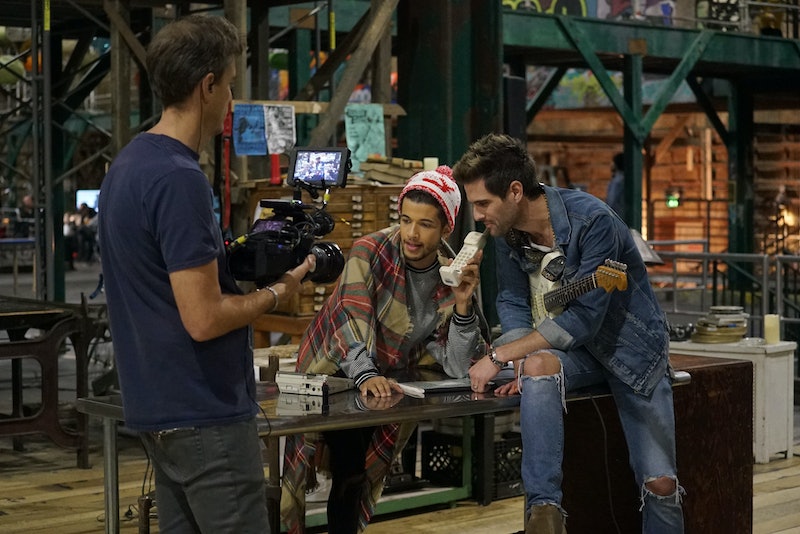 Unfortunately, Rent Live is not 100 percent that. After Brennin Hunt (who plays Roger) hurt himself, the show had to make some last minute adjustments to ensure that the show goes on. Which is why you might notice that parts of Rent: Live were actually taped scenes from the dress rehearsal earlier in the weekend.

"Most of what you see tonight will come from last night's performance," said Vanessa Hudgens in a statement that threw to commercial break, confirming that Hunt actually broke his foot. She was talking about the dress rehearsal performance, where Hunt sustained said injury and was told by a doctor that he was unable to perform live.

So it's "live" it was just.... live from the day before. This is still not lip-synced, and performed for an audience. They're just mixing some of the footage from the dress rehearsal in with the live footage. It's difficult to say exactly what is and is not live from an audience perspective, as the specific scenes are not notified. However, Hudgens also specified that the second act had been reworked so that Hunt would be able to end the show live.

Here's a tweet from someone on the inside that should provide some insight as to what's actually going on:

So he's doing the show live in a wheelchair, we're just not seeing that from home. Other members of the live broadcast audience are posting pictures and video of Roger in a wheelchair. Hopefully one day we'll get to see the wheelchair Roger footage, not just the dress rehearsal footage. This is what live theatre is all about.

It's kind of a bummer that the show wasn't able to adjust Roger's choreography and movement in order for him to go on, that they didn't have an understudy to fill in at the last moment. However, it is ultimately fortunate that the dress rehearsal footage exists and that we're able to see Hunt's performance after he did all the work to prepare for this show. Roger doesn't do a whole lot of dancing in Rent, but a broken foot is a broken foot. At least there aren't lights on the audience, am I right? Then you'd really be able to tell that there is a whole different group of people watching.

"They’ve showered me with love and kindness, which is the essence of this musical," Hunt said in an Instagram statement.

"The experience of putting together this beautiful new production of my brother’s work, while emotional, has been truly joyous for all of us," said Rent creator Jonathon Larson's sister Julie Larson in a statement according to The Hollywood Reporter. "This new cast has embodied the spirit of the show from day one and they embraced Brennin with positive and uplifting love in his moment of need. Rent has always been about resilience and community. I speak from my heart when I say that we have a spectacular show for you tonight. We can’t wait for a new generation to experience Jonathan’s legacy.”

At the end of the day, they made it work, both for the folks at home and the live audience. Hunt got to make his Roger debut, and that's what counts!

More like this
Rhaenyra's Sons May Not Last Much Longer On 'House Of The Dragon'
By Grace Wehniainen
Laenor’s Fate On House of the Dragon Differs from The Book In One Crucial Way
By Kadin Burnett
These Memes & Tweets About Alicent in 'House Of The Dragon' Prove She's The Queen Of Messiness
By Grace Wehniainen
How Much Are The 'Schitt’s Creek' Stars Worth?
By Hugh McIntyre
Get Even More From Bustle — Sign Up For The Newsletter